As some of you may know, I would like a dog. At least in my mind I think that I would like a dog. I've never had a dog, I grew up with cats. Lance, on the other hand, has had a dog his whole life. And he's the one that doesn't want to get a dog! He says that I have to wait until I'm 32 until we can get a dog. That's a solid 6 years away ... But I have my heart set on getting a French Bulldog. 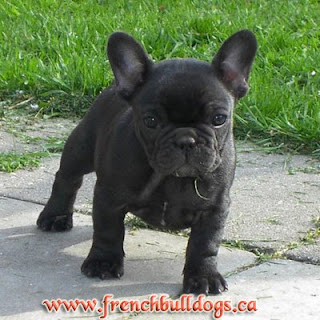 Sometimes when I need a cute fix, I read Martha Stewart's blog that is written from the perspective of her two French Bulldogs. It's called The Daily Wag. It's silly and more than ridiculous, but sometimes a girl needs a little silly in her life.

Somebody in Des Moines has a French Bulldog and brings it to some of the local farmer's markets. I've seen the cutie puppy a couple of times downtown and in Valley Junction. And I think that I talk to the owner every time too ... I must stop my somewhat crazy obsessiveness with French Bulldogs or I'm going to just start being creepy.
Posted by Kara K at 8:30 AM

So cute! Before I read the post and just saw the picture I thought, "Doesn't Martha Stewart have a dog just like that?" Very fitting for you! :o)