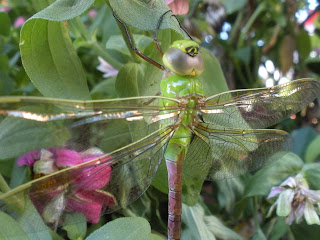 This dragon fly is massive. I took this picture at the ISF. Lance thought that the dragon fly was dead because it was so still. Then Lance touched his wings a bit and then the dragon fly became agitated and flew into Lance's eye and scratched Lance's eye.

Actually not. I lie. Lance did touch the wings and then the dragon fly flew off. But my original story is much more interesting.

I like the iridescent-ness of the dragon fly's wings.
Posted by Kara K at 8:01 AM