The Downfall of America. 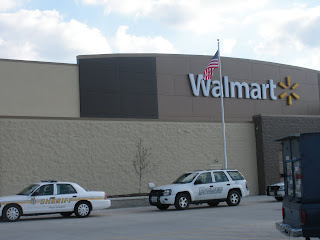 I have a confession. I went to the grand opening of the new Walmart in our neighborhood on Aug 18. Lance was horrified. Going to Walmart is equal to betrayal. According to him, these are the things that will cause the ruin of our world:
1. Buying foreign cars (because they outsource jobs)
2. Walmart (because they run small town stores out of business)
3. McDonalds (because they don't buy beef from American farmers)

I told Lance that I didn't buy anything and I wasn't there for long. I just wanted to see if they were giving anything away like a Flatscreen TV (they weren't). True to Walmart, the parking lot was packed and there were tons of people. I didn't like it. I will continue to shop at Fareway and Target. Walmart is also doing strobe lights at night that look like an airport or a casino. Lance said that if they don't turn them off in two weeks he's going to start complaining to the city council about light pollution.
Note: see the police cars in the picture? I wonder if that will be a regular occurrence ...
Posted by Kara K at 7:50 AM