My teeny, tiny little man is growing up to be a chubby little guy! Happy birthday to Lucan, he was 2 months old yesterday. It never ceases to surprise me of how much he has have grown in such a short period of time!


Here are his two month statistics:

And now for the good stuff - his two month photo. I took these yesterday morning after his feeding. I think both Lucan and Lance were annoyed by the sheer volume of pictures that were taken. It's hard to get a good picture of a squirmy baby!

His boppy pillow still dominates him. I use it to prop him up but someday Lucan won't need it. I'm enjoying the time that he still needs it. 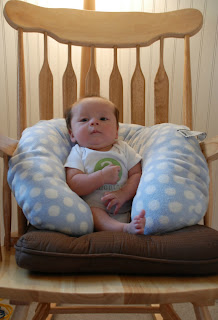 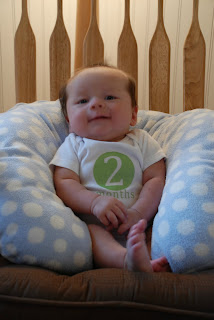 "Look at me hold my head up for my 2 month pictures! I'm awesome!" 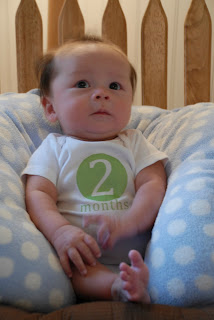 I'm putting together a brief post that will include how to track your baby's growth through their own developmental onesies!
Posted by Kara K at 12:05 PM