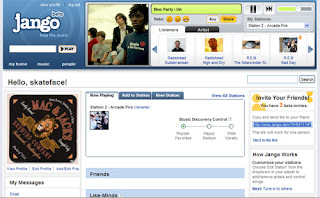 Here's a new one of my favorite things!

On a random search for Taylor Swift music (quit judging), I came across a music website that I was unfamiliar with - jango.com While I've only been using jango.com for a couple of mornings now, I'm pleasantly surprised. It works on a similiar concept to pandora.com, but has a couple of features that I'm really digging.

First off, you can setup a station based on a particular artist or song - and then they actually play that song. Pandora won't do that. It's rather irritating. Meaning I can listen to Taylor Swift's "Mean" right off the bat. (Side note: Lance and I have both decided that the song would be a great music-hold option for crappy people we have to deal with at work. All you are is mean. And a liar, and pathetic, and alone in life. And mean, and mean, and mean, and mean)

Jango.com does not appear to have a limit to the number of listening hours per month. I appreciate that. When I was in school and sitting in front of the computer at work, I would routinely burn through Pandora's 40 hour-free monthly maximum. With jango.com, that I have yet to encounter, does not have this limitation. Yay! Both music stations pre-populate your station with similar artists and songs and you can rate songs that you like or dislike.

Does anyone else have any other music streaming stations they like to listen to? How about experience with Jango.com?
Posted by Kara K at 8:00 AM