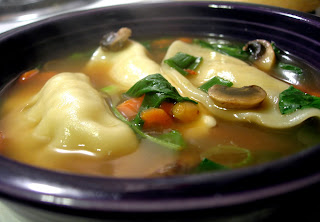 Instructions
*According to the author, Asian-flavored broth can be found next to the stocks and broths on the soup aisle or on the ethnic foods aisle of the grocery store. Liar. This Asian went to 4 different grocery stores in search of the so called "Asian Chicken Broth." I used regular chicken broth, threw in some soy sauce and a few chili pepper flakes and called it good. Apparently my Asian homing device is out of service. Also note, I think more broth would be good. *

I found the dumplings at Hy-Vee in the organic frozen food section. They were far too expensive. But they were the only ones I could find in my frantic 45 minute lunch break.

This wasn't a bad recipe, just not a new favorite. It would be fine occasionally. I got the original recipe from The Tasty Kitchen website, a Pioneer Woman affiliate.