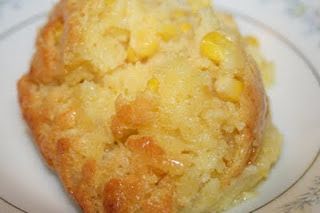 Happy post-Thanksgiving friends! Did everyone get their bellies full? My family lives about 40 minutes south of Lance's family, so we have the pleasure of doing two Thanksgiving meals on Thanksgiving. Which typically makes me feel like I'm going to puke. It's no one's fault but my own, so I can't really moan and groan about it.
Every year I bring something different to each of our family's respective Thanksgiving celebrations. The trick with Lance's family is that there are some picky eaters. Namely, Lance's dad. He is the pickiest eater I've ever met. More picky than my friend Erika's husband, Ryan. Lance's dad doesn't even like cheesy potatoes! He announced during the meal that the reason America is fat is because of cheesy potatoes ... Moving on. In the past I've brought a few things that have been more on the "wild" side (hot pepper jelly chesse dip, sweet potato casserole, cheesecake with raspberry sauce) and my FIL has refused to try them. Then I thought that I would make something less "wild" like pecan pie bars and still he wouldn't try them. This year I made a classic spoon cornbread and to no avail, my FIL still wouldn't try it. Even though it's delicious, not at all threatening and contains a key ingredient from his list of "acceptable" vegetables. Whatever. Everyone else really liked it and had several requests for the recipe. I guess I'll just have to try harder at Christmas!

But spoon cornbread is yummy and is a great addition to any holiday meal or to a chili feed. Take my word for it. Not my FIL's.

Ingredients
1 box Jiffy cornbread mix
2 eggs, beaten
1/2 can of corn, drained
1/2 can of creamed corn
2 sticks of butter, melted (this is not a health recipe!)
1 cup of sour cream & chives dip
Cheese

Combine all ingredients, except cheese. Pour into sprayed 9x9 square pan. Bake at 350 degrees for 45 minutes. Remove pan, sprinkle on cheese and bake for another 10 minutes or so, until golden brown. Enjoy!
Posted by Kara K at 8:08 AM

Email ThisBlogThis!Share to TwitterShare to FacebookShare to Pinterest
Labels: Recipes