Two Saturdays ago we started Lucan on rice cereal. According to the nutrition and food pamphlet our pediatrician gave us, if your child has doubled their birth weight, is somewhere between 4-6 months in age, can turn their head away when they are full and show an interest in table food, they may be ready for their first foods. Lucan is just shy of 5 months old, weighs a solid 17 lbs, and shuts his lips tight when he's full. Recently he's been intently watching me when I've been eating, going as far as sticking out his tongue and smacking his lips. Based on all of those things, we determined that Lucan was ready for his first solid foods.

Now some parents skip rice cereal altogether and go just for foods like mashed up avocados or bananas. But we're starting slowly and the rice cereal seems to be going pretty well so far.

A funny story about when Lance and I started discussing starting Lucan on solids. We had both read the pamphlet and agreed that it was probably about time to try cereal. When I told Lance that rice cereal is what is typically recommended he said "What, so like Rice Krispies that you let get really mushy in the milk? Is that what we're feeding Lucan?" 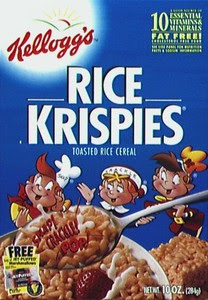 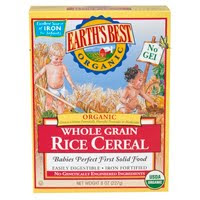 Oh good heaven's Lance. It's a good thing we're in this together! Baby rice cereal is more akin to Cream of Wheat and less Snap-Crackle-and-Pop. 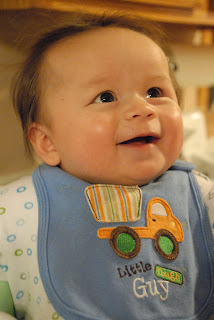 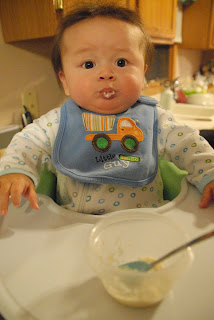 "What? I'm supposed to swallow and not just put everything in my cheeks like a chipmunk?" 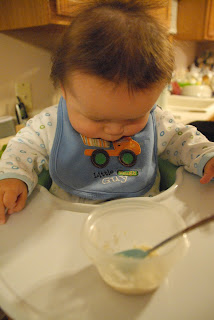 Oh how funny. Really, Lance? Why not just make Rice Krispies treats for him to take to share with the kids at daycare? I love the pictures...so cute!!