Originally I thought that it would be ridiculous to get Lucan a Halloween costume and dress him up. Based on the sheer number of pictures on facebook of parents and their kids in festive Halloween dress, I was wrong. So I'm glad that I went against my first instincts and purchased a Halloween costume for Lucan. Besides, a $5 consignment pumpkin costume is hard to beat!

We didn't actually go trick or treating, but we did take Lucan to our church's Fall Festival. He got to exhibit all of his cuteness there. Lucan also got to model his costume for Grandma and wear it at daycare for their little Halloween party. Lance also put Lucan in his pumpkin costume to wear for the trick or treaters that came to our door. You can imagine Lance's vast disappointment when no one visited before Lucan had to take off his costume and get fed (as it's really challenging to breastfeed a baby dressed in a pumpkin costume!) 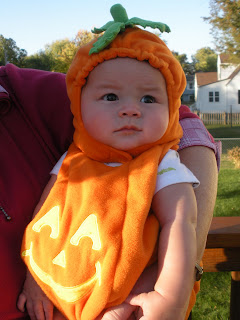 Lucan's cheeks are so chubby that his little hat could barely contain them. 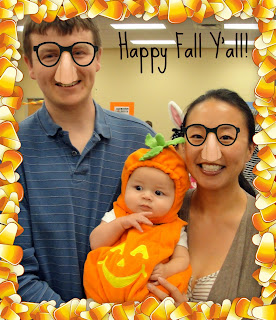 Cutie! My babies were also pumpkins. But I got rid of the costume, so I'll have to borrow one next fall. Maybe Lucan's? =)