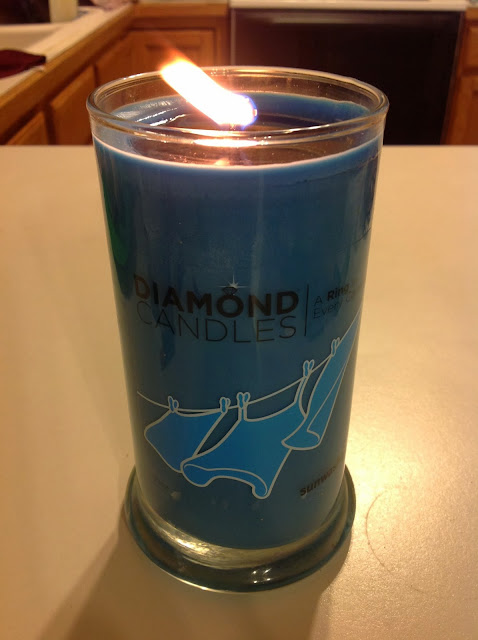 My friend Rachael thinks that I win a lot of stuff. I suppose that's fair. But I enter a ton more things than I win. I suppose it's the law of ratios.

I won a Diamond Candle giveaway from Jennifer's blog, Style Your Life. Jennifer has great taste and is always causing me to think about my clothes differently (in a good way!). When I received my email from Jennifer, I was ecstatic because I was really interested in Diamond Candles. You see, each candle is all-natural, made from soy, but contains a surprise inside - in the form of jewelry! Each candle contains a ring - valued from $10 to $5000. It's like Cracker Jacks, only prettier and for grown-up women :)

The only disappointment I experienced was that many of the fragrances I was interested in were sold out. I had no idea when things were going to be restocked and I was too anxious to wait long, so I went with something that was in inventory. I chose the "Sunwashed" candle because I was looking to branch out from my normal spiced vanilla or cinnamon pumpkin. "Sunwashed" smells like clean laundry and is light and airy. I was initially concerned that it would be really overpowering, but it's nice and subtle.

I haven't dug my ring out of the wax yet. I've seen pictures where women get a spoon out and start digging. I'm trying to be a bit more patient than that. But I'll follow-up and let you know what I dig out of my Diamond Candle.

*I was given the candle, but all opinions are my own*
Posted by Kara K at 9:09 AM

Cool! What will they think of next?!

I've never heard of that but it's super creative! Can't wait to see your new bling!