We will not negotiate with terrorists.

When it comes to meal times, I find those words coming to mind several times a day. My son is a tiny table terrorist. I just finished reading Jenny Rosentstratch's Dinner: A Love Story where she cataloged her family's meals from when she and her husband were newlyweds to being a working mother with two small children to transitioning to being a work at home mom with two slightly older kids. I totally dug her book as it was a combo cookbook/life story. But I'm the sort of person who finds that sort of thing awesome. But she coined the phrase "tiny table terrorist" when trying to find foods to feed her youngest. I empathized with the chapter she titled "How to Triumph over a Tiny Table Terrorist (or, How Not to Love Your Mind When Cooking for a Picky Eater). I think most parents (okay, not you Jessica), have a moment in their life that fits this phrase.

Today I tried to feed Lucan a slice of toast with butter. He refused and threw the bits on the floor. I tried to give him some banana chunks. He threw those on the floor too. (note: later Lucan got out of his high chair and proceeded to kick his legs wildly through this bread crumbs and then sit on the banana chunks. What a mess. But it's one of Lu's favorite ways to scatter food. He does this on a regular basis with cheerios too.)

Lu is high maintenance eater. He happily ate a piece of zucchini bread and when I fed him the banana chunks with the butter knife I was using to slice up the banana, he ate those too. Lu doesn't like fruit unless it comes in a puree or I've skewered and grilled it. Can we say diva? Regardless of what sippy cup I use or what is inside the sippy cup, Lucan has to have a bib on because he will take a drink, swish and spit it all out all over him.

While Lucan is not as bad as some eaters at this age, it's still annoying. I think his plan is to just eat half of whatever I'm eating. The other night he ate almost all of my zucchini and broccoli out of my pasta. I was annoyed. He tries to eat all of my fries. I was also annoyed. I acknowledge that my child is stealing bites of zucchini and broccoli, which is not typical. Last night he happily ate eggplant Parmesan. It just goes to show that we all have our food battles with our children. 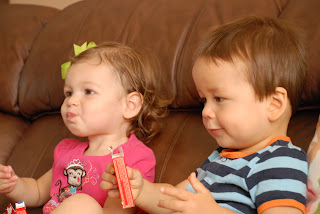 This is a picture of Lucan and his girlfriend, Bridget, sharing a snack of yogurt covered raisins. And when I say "sharing" I mean, Lucan was stealing Bridget's, so Mandy had to give Lu his own box before Bridget got too upset!
﻿
Posted by Kara K at 12:38 PM