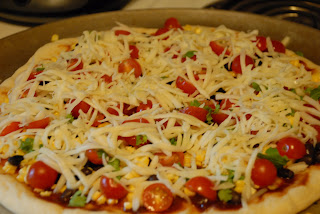 ﻿One side benefit from not having a job is being able to spend more time cooking and using our garden produce. Yes, it's a very small benefit, but we're looking on the bright side here folks. Under normal circumstances I wouldn't be able to start pizza dough in my bread machine on a weeknight. Now, with a little planning and foresight, I can do this fairly easy. I need to look into making pizza dough ahead of time and then freezing it. Does anyone know anything about doing that?

The main reason I made this particular pizza was because we happened to have all of the ingredients on hand and fresh. Fresh cherry tomatoes, cilantro and sweet corn. I even happened to have some black beans in the fridge begging to get used. I've taken to buying dried beans, soaking them overnight and the cooking them on low in the crockpot during the day. It's the cheaper option and I throw them in the freezer (never to be seen again) and pull them out as needed. This was also a good supper option because it includes no meat. Meat is pricey. Our stockpile of beef has dwindled and there isn't any magic money lying about to buy another side of beef. So, meatless Tuesdays it is. Lance has even stopped complaining about the meatless meals we have because it typically uses up a healthy pile of garden tomatoes.

Enough tangent. This pizza wasn't bad. Most people would probably be like this pizza as long as you like subbing bbq sauce for your typical tomato sauce. I'm not sure if I'm part of that group. But again, we had every single ingredient on hand, so it was hard to argue against making this pizza. I'd probably make it again too, but not terribly often.

Without further adieu, the recipe.

With my bread machine you add all the ingredients in the order they are stated and then hit the program for dough. It takes an hour and 20 minutes. Then you pull out your dough, flour it lightly and then press into a pizza pan, top with desired ingredients and then bake at 425 degrees for 20 minutes.