“The days are long, but the years are short.”

It’s often said of parenthood, “The days are long, but the years are short.”

There is certainly truth behind that statement. There are times where I'm standing in the kitchen trying to get supper going and Lucan is whining and tugging on my shorts for me to pick him up. I feel like I'm trying to juggle four different things from making sure that I don't burn dinner and keep Lucan from either melting down or trying to surf on the dishwasher door (seriously child?!). That magic hour from when I pick-up Lucan from daycare to when supper is on the table is what I imagine the author had in mind when he penned those words.

Lucan is going through a period where he doesn't like to be away from us or be held by a "stranger." I remember when my other friends' kids went through this phase too. I remember specifically my friend being embarrassed that her daughter didn't want to be held by me and apologizing for it. I can identify with that feeling of embarrassment. Lucan! This is a nice person who loves you very much and just wants to hug you for a bit - be nice!!

Lu also gets upset when one of us takes whatever he is playing with away from him. Wailing and gnashing of teeth. The mornings have become interesting because Lucan insists that he gets to hold onto his blankie while he has his diaper changed, while he's being dressed, and while he nurses. Sometimes he also insists that he get to hold his bottle of saline nose drops too. And if he doesn't get these things - well, you can expect hysterical tears.

My friend Erika has told me from the very beginning that everything is a phase. She's absolutely right. I know this whole first year of his life has been a phase. The days of Lucan being mesmerized by the fan - gone. The days of swaddling - gone. Sometimes I have to pause and remind myself that this moment of babyhood will soon be gone too ... 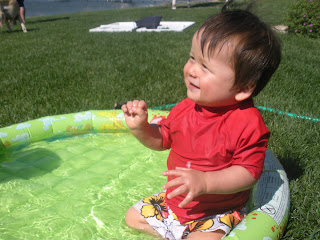