Before I had Lucan, I had decided that I was going to cloth diaper, ban television, teach sign language, never let Lucan sleep in our bed, make all of Lucan’s baby food myself. Like so many of my other preconceived notions about motherhood, things changed once I actually became a parent. Lucan has never had a cloth diaper on this tush (infants poops are appalling!); he gets to watch television on occasion; he has been signed to everyday for 3 months and we have yet to have him sign back to us; and has been allowed to sleep in our bed at times when I’ve tried in vain to get him to back to sleep. But one thing that has stuck is my resolve to make all of Lucan’s baby food.

By making Lucan’s baby food, it has allowed me to be in control of the ingredients and the food combinations. For example, I’ve been fortunate to be able to use herbs, butternut squash & green beans that we grew in our garden last summer. It’s been rewarding to see the fruits of our labor be used in such a worthwhile way. I get to experiment with all sorts of flavor combinations from banana/avocado/pear puree, butternut squash/sweet potato/curry puree to pea/spinach/mint puree. It is my fervent hope that by exposing Lucan at such a young age to a variety of flavors, that we can avoid the food tug-of-war that is commonly associated with toddlerhood.

Making his baby food isn’t difficult, but does require time and some advanced planning. Most of the tools that are needed can be found in any standard kitchen. I use a food steamer that we already had, but an easy solution would be to steam foods in the microwave. With boiling, many of the nutrients are leached into the water which is why my preferred cooking method is either steaming or roasting. I roast root vegetables on a cookie sheet in the oven. When making smaller batches, I use my immersion blender. But because I like to do batch cooking, my food processor is a better choice. Generally I set aside some time a couple times a month to make large batches of baby food. I dice, roast, and steam large quantities at a time. Once everything is sufficiently tender, I puree and portion it into smaller ready-to-eat containers.

Creating my own baby food is a choice that I’ve made for our family. It allows me to provide, with absolute certainty, the best food possible for my little one.

If you would like more information about making your own baby food or would like to buy some baby food, let me know! 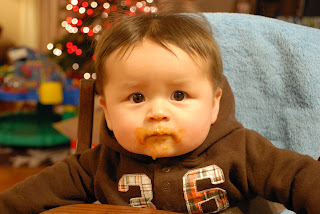 Email ThisBlogThis!Share to TwitterShare to FacebookShare to Pinterest
Labels: DIY

What a cutie! I made most of the baby food for the first two, but we'll have to see if I can still pull it off with this little one.

Homemade baby food is such a good idea...I never tried it with Michael. We also signed with Michael for a long time and he only started picking it up when he could actually talk. And actually now he can do signs better than ever...so who knows? I think boys are stubborn. :o)