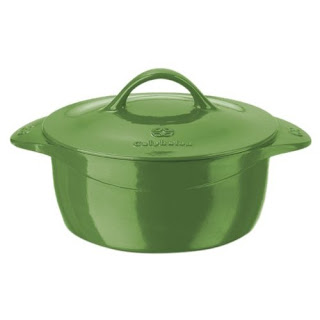 I have this chive green dutch oven. It's a great color and a much used item in my kitchen. I use it primarily for making soups on the stove and roasts in the oven. The lid has a dimpled top to help redistribute moisture to food as it cooks. I won't lie, this thing weighs a ton. Especially when it's full of chicken, potatoes, carrots, celery. It does a really nice job of cooking things at an even temperature. It retails on Amazon.com for $90.99 but I got mine at Bed Bath and Beyond for under $70 with a 20% off coupon (did you know they won't accept expired 20% coupons anymore? Let me tell you, that was a blow to my checkbook when I discovered this past spring). It's still a somewhat pricey piece, but much cheaper than the Le Cruset dutch oven I've been pining for for two years. That puppy retails for $249. Ha! It's going to be a few more years before I've got dollars to buy a Le Cruset.
Side note: If you live in an area with a Marshalls, TJ Maxx, or Tuesday Morning, often times Le Cruset pieces will end up there for less. Still over $100, but less than typical retail amounts.
Posted by Kara K at 8:30 AM