Lance, the husband, who likes to say that blogging isn't the best use of my time, told me that my blog sucks because it's been so long since I've posted. SO SORRY LANCE. :)

Month 10 has been one of the most challenging months to date. Not because Lucan has suddenly started getting mouthy or turned into a kung-fu ninja, but because he has been sick. I know that it sounds trite to be complaining about such infantile things like ear infections and colds, but they have kicked our butts in this household.

Around the end of March, we noticed one night that Lucan was coughing some. Not a lot, but any coughing from Lucan is a sign of concern. At the beginning I wasn't too worried, I figured it was just a cold. No biggie, all kiddos get colds. But then my spidey-mom sense kicked in and I started wondering if Lu had an ear infection. I didn't really want to take him to the doctor or have him go back on antibiotics. I probably waited too long, but with Lucan it is hard to know when he's sick enough to go to the doctor. He typically doesn't have nighttime sleep issues, run a temp, or get overly crabby when he is sick. So I held off taking him in. Then by the time he did go in, Lu had a full blown double ear infection. Round one of antibiotics. 10 days late and 1 visit to the chiropractor too, still no signs of improvement. Lu was still coughing, periodically throwing up and still tugging on his ears. And OMG my sweet, easy going child turned into the most high strung crabby version of my child. Cue round two of antibiotics. Still no real signs of improvement and he was still coughing quite a bit. Second chiropractic visit and another trip to the pediatrician. Ears are "better" but Lu was still coughing and throwing up. So the ped put him on predisone - a steroid that has a tendency to make babies edgy and crabby. Just great. We did the full five days of predisone and thought he was doing better. But then he spiked a temp again (and was still coughing), so Lance took him back to the doctor. They said that his ears looked good ... No more meds. But Lu is still coughing and the other day spiked another temp and threw up all over himself mid-day. I haven't taken him back to the ped, but we are going to the chiropractor one more time. We'll see. Lu lu, feel better.

That being said, illness and crabbiness aside, Lucan has made some progress this last month!
And in other news, I started a new job at the beginning of the month. Same company, different department. The major bonus has been my new 30 hour work week. One day a week I stay home with Lucan and we chill together. I'm looking forward to when he's healthy and back to his old cheerful self! 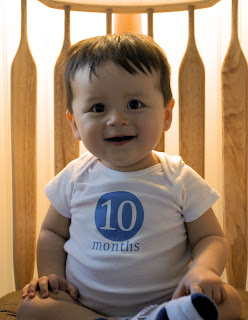 Did someone say I was crabby? I don't believe it! 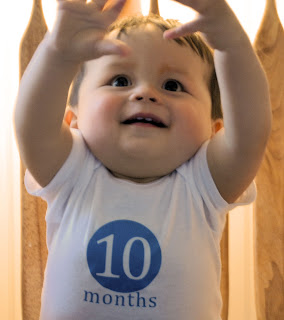 Reach for the stars outlaw! 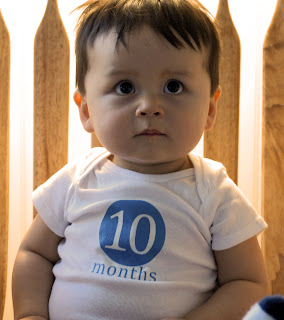 I am solemn and serious. I am giving you all sorts of model face. I'm America's Next Top Baby Model - male edition