This is our first summer we've had any sort of tomato harvest to speak of. I guess when you've prayed for five years for tomatoes, God answers. Interestingly enough, in our answered prayer, God decided to deduct green peppers from the equation. Perhaps he knew that we are having a hard enough time keeping up as it is. I've had two bags of green beans sitting in the fridge waiting to be blanched for who knows how long. I do miss green peppers though. They're probably second after tomatoes for things we use the most of out of our garden.

Getting back to tomatoes though. While we haven't had a "bumper" crop to speak of, we've had more than we've ever had before. We were given a yellow tomato plant from one of Lance's co-workers that did quite well. It produced large, perfectly shaped tomatoes. The only difference I really noticed between your traditional red tomatoes and the yellow ones, was that the yellow ones might be slightly sweeter. Slightly. Out of the garden we were also able to harvest roma tomatoes, cherry tomatoes and your traditional large red globe tomatoes. Our cherry tomato plant did amazingly well. Picking hundreds of cherry tomatoes starts to feel like punishment after awhile, especially when you are hunched over, standing awkwardly between plants, trying not to crush tender roots while leaning precariously trying to get that one cherry tomato just out of reach. 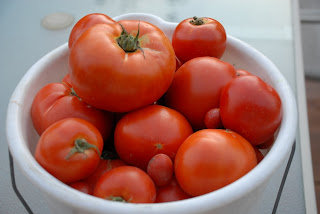 This year we decided that our canning adventures would be limited to diced tomatoes and salsa. We never really had enough large tomatoes at one time to can, so we had to supplement with tomatoes from Lance's parents' garden and my parents' garden. Combined, we had tomatoes coming out of our ears. 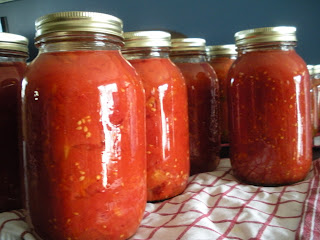 In true Lance and Kara fashion, we devoted an entire weekend to tomato canning, following the recommended guidelines from Iowa State extension. It made me hate life just a little bit. The kitchen was sweltering with gallons of boiling water and tomatoes simmering on the back burner. I felt like I blanched mountains of tomatoes. We don't use a pressure canner, so one batch, start to finish, probably took close to 2 hours. For a jar of tomatoes that I could purchase for around 70 cents. Yep, I'm still weighing the cost savings on that one. We did applesauce last year because you can noticeably taste the difference between homemade and store bought. Diced tomatoes? Not so much. On the second day we also did salsa, following a tested recipe from Ball. It did not call for salt. It needed it. Now I have quarts and quarts of salsa that needs salt. Fantastic.

What will we can next year? No idea. Some sort of fruit? Green beans? Or maybe ... we won't can at all. Shhh ... don't tell Lance (actually I can't even blame Lance. I seem to always get this itch to try something new every summer, so it's always partially my fault too)

Up next in tomato adventures - bruschetta.
Posted by Kara K at 8:00 AM

Email ThisBlogThis!Share to TwitterShare to FacebookShare to Pinterest
Labels: garden

Came across your blog from Simplyvonne's blog. Love your header picture (especially the Lychee).

Sounds like you had a fun weekend with all your tomatoes!