From the very beginning I had visions of a nursery that wasn't overtly "baby." I wasn't keen on pastels or anything overly cutesy. With our available budget and the size limitations of the room, I didn't have plans of grandeur or anything too over the top. Our nursery, in my humble opinion, is exactly what I hoped it would be.

I wanted wainscoting early on, which Lance was firmly against. But it's really hard to tell your pregnant wife no, especially when she happens to be a very determined individual bent on staging an attack from all sides. This would include recruiting various friends to tell Lance wainscoting was awesome, classic, and never goes out of style as well as me emailing Lance various blog posts about how great wainscoting is and then "browsing" for wainscoting at Home Depot. Like I said, determined :)

I think the results are awesome. Lance can now consider himself to be a real DIY man! 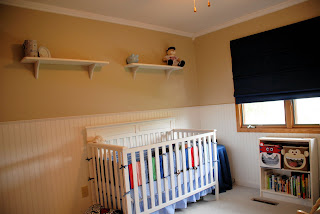 The nursery is a happy medium, of something old, something borrowed, and something new.
The blinds were actually in our guest room and were swapped out and put in the nursery.

The hanging wall shelves were already in here. Do you see the Twins teddy bear on the shelf? It was a shower gift from some dear friends who know Lance well. Lance has already started brainstorming about how he can properly introduce the baby to baseball and how to root from the Twins (even when they are having a terrible season).

The short bookshelf contains books that were gifted to us at one of our baby showers. The left bin is a tiger bin from Target, which was a baby shower gift from my cooking club friends. It contains extra bedding. The monkey bin on the right is also from Target and contains a few infant toys. 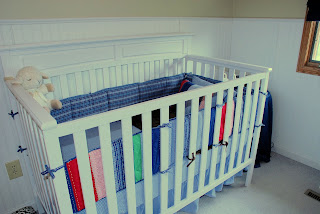 The crib and mattress were from Target. The bedding is from Pottery Barn Kids - their Bright Stripe bedroom collection. I purchased the bedding off of craigslist in March. There's a funny story about that purchase, you'll have to ask me about it if you want the whole story though. 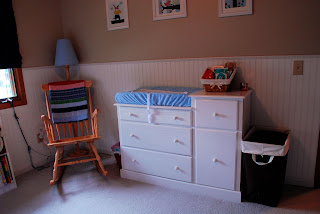 The dresser/changing table combo was purchased off of craigslist too. My parents gifted us the rocking chair. The floor lamp in the corner was another craigslist find too. You can't tell from the picture, but it has small star cut-outs on the top and bottom of the shade. The brown and cream clothes hamper was a baby shower gift from Target. 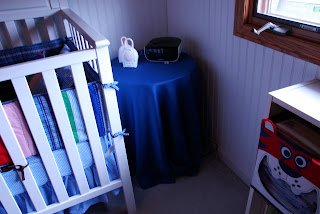 The table in the corner was a reject table from my mom and dad's house. It used to have a yellow table cloth covering it. I had my own unsuccessful adventure in navy blue Rit Dye which resulted in a dingy gray tablecloth. Needless to say, I ended up buying an entirely new tablecloth from K-Mart (who knew those tablecloths were so hard to find!) 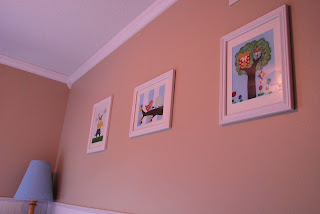 The prints on the wall are an Etsy find. They are probably as "baby" as I got with the nursery. They feature pictures of animals in various classic colors and prints.

One of the trickiest things I found was finding the right shade of neutral tan/beige. I know, it's beige. How hard could it be? I didn't want it too dark, too gray, or too pink. Believe me, beige is hard! We ended up going with Sherwin Williams' Urban Putty. I really like it. I was very pleased with the choice. One thing to note - I am a better painter than Lance. He really is slow :)

The finishing touches on the mop board were concluded Wed night. I think the OB put the fear of God in Lance when the doctor said that he thought there was a 50/50 chance of me making my next appointment. When we got home, Lance hopped to it and finished it all up!

I love our nursery. The base is neutral enough where with a few switches it could easily become a nursery for a girl or, better yet, just be a regular bedroom for whoever lives here next. I hope you enjoyed the tour and I hope our baby likes sleeping in here!
Posted by Kara K at 4:21 PM

Email ThisBlogThis!Share to TwitterShare to FacebookShare to Pinterest
Labels: pregnancy

The nursery looks amazing. I love the little prints on the wall.

It looks great, Kara. glad you pushed for the wainscoting. =) Looking forward to hearing your big news!

I love the neutral walls and wainscoting. It could easily go lots of different directions in the future. For right now...perfection! Happy waiting! :o)