As Dr. Gina pointed out, I'm behind in my updates. So as a nod to accountability, here goes Gracie's 10 month update (note: Gracie was 10 months old as of Oct 1).

10 months is a good age. Gracie is mobile as she's now crawling forwards and backwards. I'm not sure if there's anything cuter than seeing a wee one wiggle her little butt as she's crawling happily towards you. It's just really precious to see someone so happy to see you - happy enough to get where they are going on their own accord! 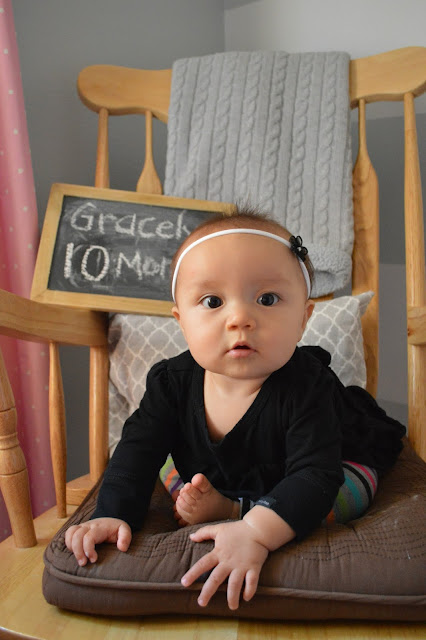 Sleeping: Same as 9 months - two naps and to bed around 7:30 PM every night. If we push it much past 8ish, it can be dicey. Lance hates that you are a belly sleeper. Ever since you learned to roll-over, it's been belly sleeping all the way. Halo's mantra of "back is best" is clearly not being observed in our household. Your bedtime ritual is thumb in mouth and clinging onto the ribbon blanket I once upon a time sewed for Lucan. He never took to it, so it's yours! Now that you aren't at daycare your naps are sooo much better. You are never going to be a rockstar napper like your brother, but since you were once only napping a total of 45 minutes total, I'll take it. You will even go down for a nap in the pack and plays at church nursery which is awesome-sauce. Your morning awake time varies from day to day - sometimes 6 AM (yuck) and sometimes as late at 8 AM.
Eating: Sometimes I try and give you chunkier food then you prefer. And you let me know that you aren't a fan by fake coughing and choking. You are getting marginally better at feeding yourself. Marginally. You will occasionally stuff a puff in your mouth. I tried to feed you a dried apple. You choked and sputtered all over with that one. Still nursing, but that's dialing down. If I can figure out how to get you to take a sippy cup, we'll wean around one year. You eat just about anything pureed - applesauce, pears, peaches, prunes, carrots, peas, beans, squash, sweet potatoes, yogurt, bananas, smashed avocado. I gave you sliced strawberries. You must have thought they were poison so Lu ate them.
Wearing: 9 month clothing and some 6 month stuff still. At some point I thought that it would a super idea to buy 4000 size two diapers on sale. You could probably be sized up to size three diapers, but because we have an entire box and one sleeve left of size two diapers we'll be stuffing you into them until the end. It's a rookie mistake and I should know better.

Playtime: there aren't many toys in the house that weren't first Lucan's. But at your age, no one really cares about what "toys" really constitute. You spend a lot of time taking some brightly painted wooden numbers that belong to a Melissa and Doug clock in and out of a christmas tin. You also like to knock down Lucan's legos, magnatiles and blocks which really irritates him. Shredding paper is fun too so we have to be careful about what's left on the floor otherwise one of Lu's treasures gets destroyed.

Milestones:
Teeth: two on the bottom! This was a big deal. You are a pretty good teether, so I have nothing to complain about.

Social: So serious. You are watchful and take everything in when we are out and about. Your family is your favorite. If I have to leave you are okay with dad, but if both of us are gone you get sad for a moment or two. If I leave the room or walk by you without picking you up, you whine until I do pick you up. It makes getting supper made really challenging.
Physical: crawling like a champ. You like to touch things and really examine them. Especially my jewelry. You are pretty quiet overall, but you do a thing we all refer to as "the Gracie Growler" where you have this guttural sound you make which is pretty funny coming out a petite thing like you. You move things from hand to hand and are able to do pincher fingers to pick something up. But still not feeding yourself. You expect someone to put the food in your mouth for you.

Nicknames: Gracie, Gracie Beth, Gracie Lu, Gracie Girl. A gal that I met from Louisiana commented that Gracie Beth is a very southern name. I like it. I think being southern is the equivalent to being a lady :)