Everyday I think that I’ve ruined my child. 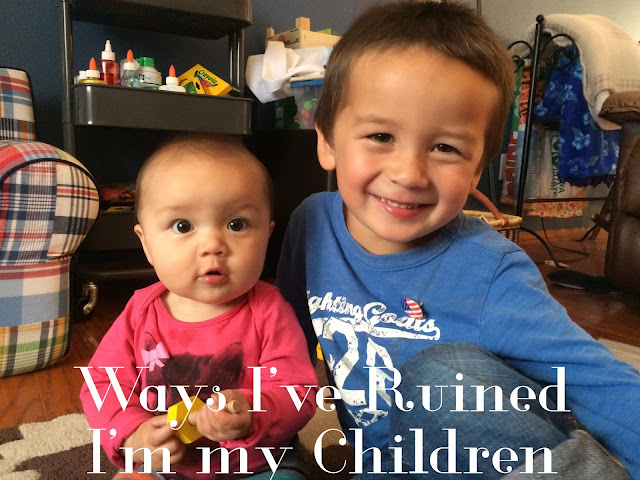 I don’t think there is any job that comes with more self-doubt or criticism then being a mom. With the exception of being the POTUS (President of the United States – Lance asked me what that meant so it occurred to me that it’s not just a standard acronym that everyone knows) or some other world leader, I don’t think there is a job that has more of a personal stake.

Today’s self-doubt? My oldest is four and has yet to participate in any organized sport or some sort of musical endeavor. I have friends whose children have been dribbling soccer balls as long as they have been walking. Clearly my child will suffer the social repercussions of not participating in a group sport at the age of four.

I am not doing baby-led weaning in any form. I make purees for my little and thought I was finally doing something right because I was making food for her. Now I’m fairly convinced that she’ll never feed herself or eat “real” food.

We don’t always brush my eldest’s teeth in the morning. I just don’t have the time. Yes, I know.

He also knows the order of the PBS kid show lineup.

Just the other day he asked me when he is going to get to take swim lessons. Crap.

I can’t bear to her my daughter cry, so every time she cries, I pick her up. Yep, I’ve ruined her.

Lucan told me last time at Chick-fil-A that we eat there a lot. To his point, we did eat there twice that week.

He also told me tonight that “supper smelled funky.” To his point, yes, fish sauce does smell a bit. He also likes my MIL’s cooking better than my own. This is probably due to the fact that she doesn’t hide zucchini in her spaghetti sauce.

I fall more on the path of helicopter parent than free-range parent. If you read enough articles, helicopter parenting with MOST DEFINITELY ruin a child. Looking at who I am with baby #2, I acknowledge that I’m definitely more relaxed this time around but by no means am I a chill mom. Yes, I worry that my hovering will ruin both of them but it outweighs my fear of them being taken out of my backyard while I’m not watching.

My point is that motherhood is hard. There’s no instruction manual. There are more moments I care to admit that I have no idea what I’m doing and I’m second guessing myself. The only thing I can do is follow my instincts and ask everyday for God to cover all the mistakes I’m making with His grace.
Posted by Kara K at 10:21 AM

I'm with you on many of these things... teeth brushing in the morning for the kids rarely happens... and iPod/iPad time hapeens probably too much.