Congratulations it’s a girl. Wow. Shocker to say the least.

I think in every mom’s heart there is the desire for a daughter. At least if I’m being truthful with myself, I really hoped for a girl. Don’t get me wrong, I love Lucan wholeheartedly but there is something to be said about the bond of a mother and a daughter. Lucan is more than I can ever ask for but I’m quite certain he won’t be wearing gold glitter polka dot leggings. Lance and I will probably keep our family numbered at four, so I knew this was it. Ever since the start of this pregnancy, I had repeatedly told myself that I would not allow myself to be heartbroken if I ended up being the mom of all boys. God knows what he's doing and would know if I would be better suited to being a boy mom. So I left it at that.

I know that I’ve mentioned that Lance has his conviction that second children don't get as much special attention as first children, so he wasn’t content to find out the baby’s gender at the doctor’s office like normal people. When we had Lucan we had a big brunch with our families and found out with everyone at the same time. It was fun, but more work then I really wanted to put myself (or my mom) through. And after four and a half months, I just plain wanted to know. But that type of thinking was not amenable to dear husband.

Cut to six days later. July 30, National Cheesecake Day at the Cheesecake Factory. Both of our sets of coworkers were beside themselves waiting to find out boy baby or girl baby. A couple of Lance’s coworkers convinced Lance to give them the card with the gender written on it and they would call into the Cheesecake Factory and have them bring out our cheesecake revealing the baby’s gender. Pretty cute, huh?! So as we got settled in with appetizers and such, Lance talked to our server and made sure everything was arranged. And then this happened: 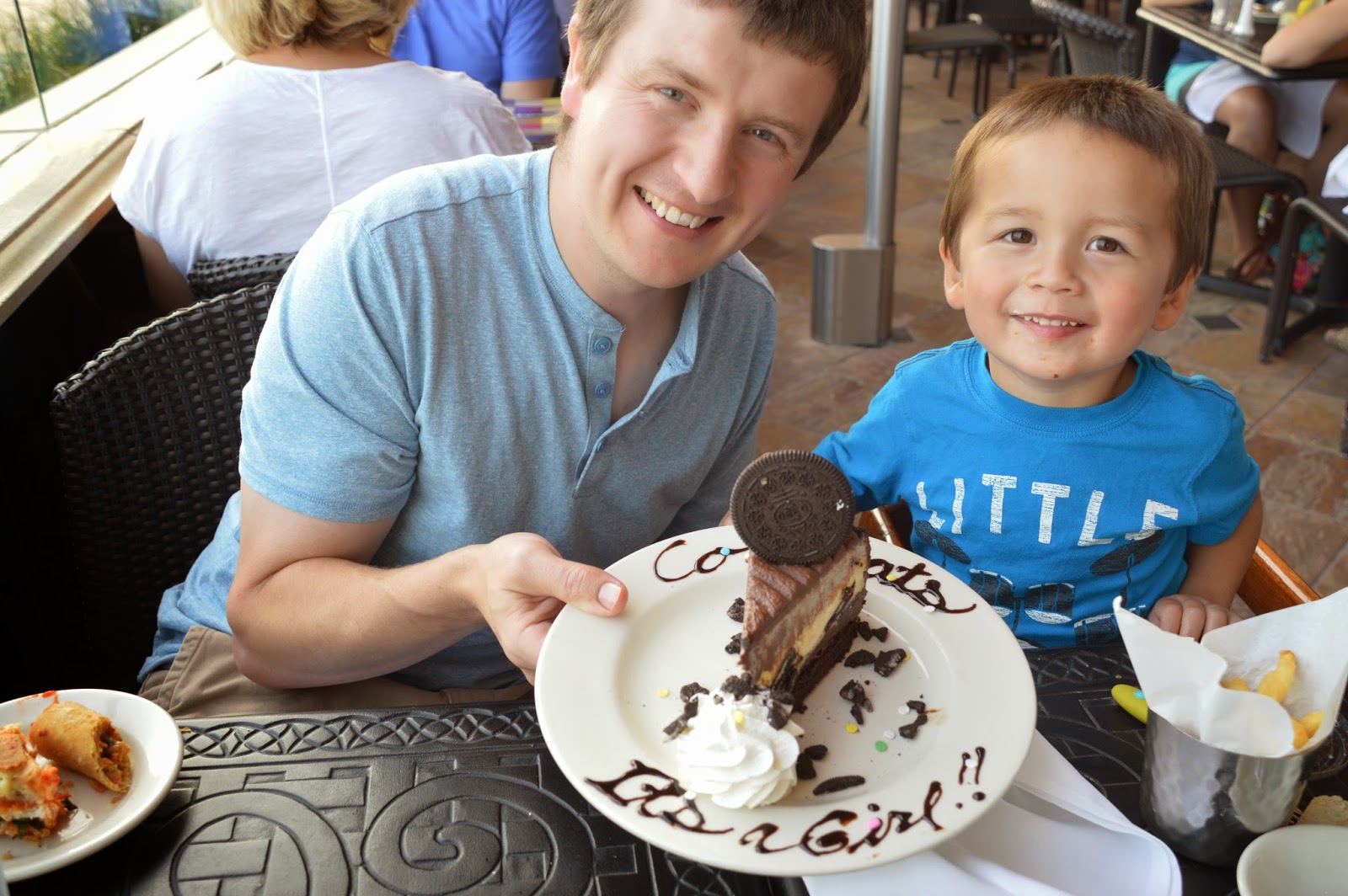 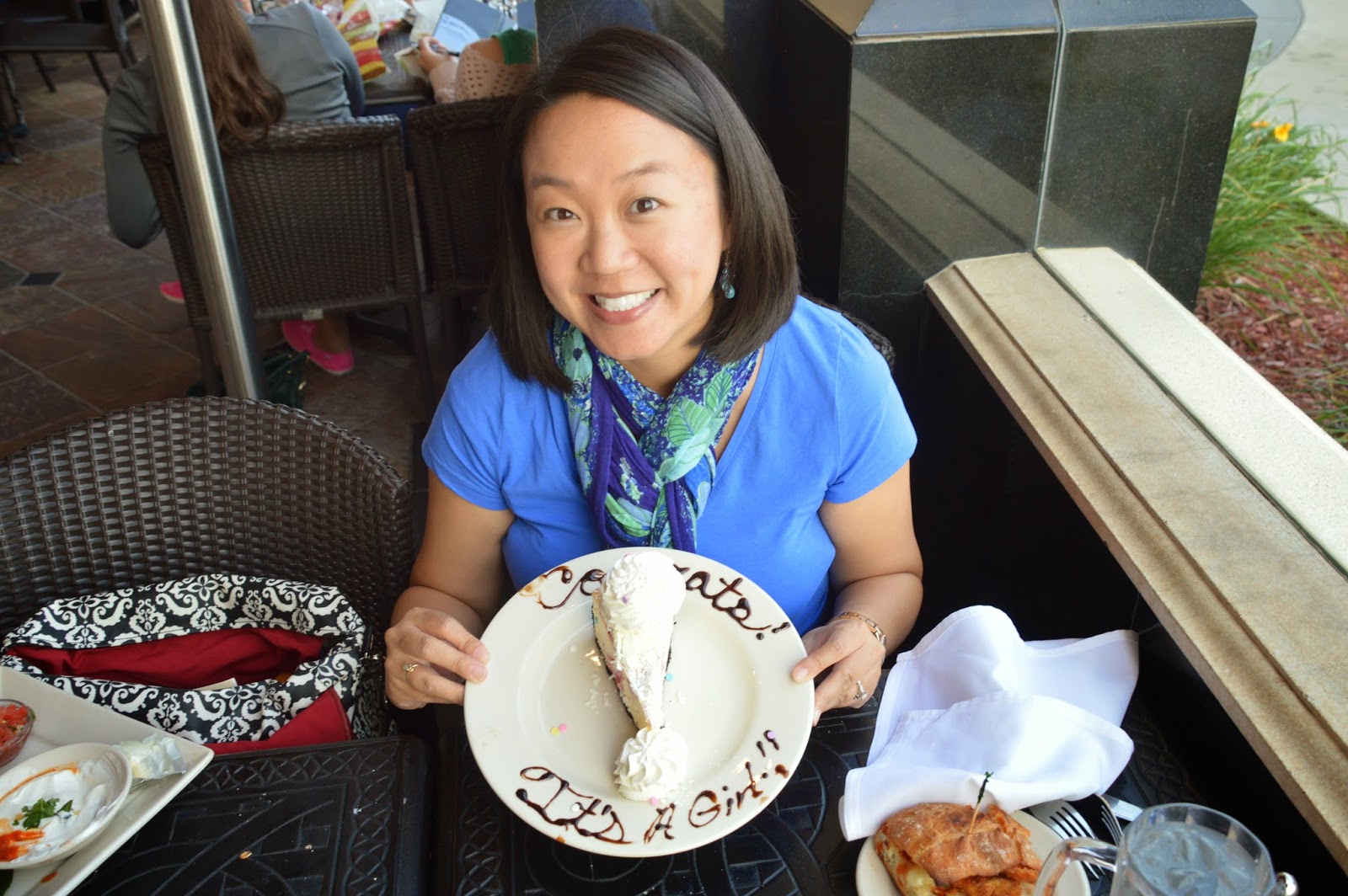 Needless to say we were both left speechless. Lucan was busy stuffing himself full of chocolate flavored whipped cream while we both hugged and sat in stunned silence. There's nothing like finding out the gender to make everything being really real, really fast. Our friends and family have been so excited about the news and keep saying things like "Lucan is one of the most adorable children ever, but this baby, wow, she's going to be so cute!!" I'm feeling a little bit overwhelmed by "how cute" this child is supposedly going to be.

We will be going to see this kiddo monthly until the end. After my ultrasound, the doctor said there is
a spot on my placenta they're concerned about and will be monitoring the growth of the baby to make sure this spot isn't interfering with her development. It's my prayer this pregnancy will continue smoothly and that the most exciting time will have been finding out that we're blessed with a daughter! (PS: should we start saving for a wedding, like now? Just kidding. Sort of.)

Email ThisBlogThis!Share to TwitterShare to FacebookShare to Pinterest
Labels: Baby #2

We never found out the gender with our boys so it is all new to me to know that I am expecting a girl as well (we figured we already had the big surprise!). It is so fun and people are just so excited that say anything that pops in their head!

Praying for a healthy pregnancy! It is exciting to see the baby often on the ultrasound...so amazing!

CONGRATULATIONS! So excited for you :) Can't wait to see all the fun girly things you plan

Hooray--a girl! Hoping the spot will go away and that you'll experience a smooth rest of the pregnancy.

So nice to see you a few weeks ago!

Love this!! Sweet and simple way to find out...perfect!! I'm so excited for you. I love my Conrad, but Gwendolyn and I are bffs!!