That time I did something bad to my face: oil cleansing.


Have you noticed the oil cleansing movement popping up in the face wash aisle? Or read about it on different blogs? Trust me, it’s out there (here’s one example). I had read about it a couple of different times and was intrigued. It’s cheap, it’s all natural and it sounded reasonable. The basic premise of the idea is that by using soap and normal face washes, you are stripping your face of oils and then making it produce more oil to replace what’s been taken away. In my head, it sort of made sense, I could get behind their rationale. And from what I can see, it works really well for some people. I am not some people.

Holy crap, did my face hate oil cleansing. My oil cleansing mixture consisted of two parts jojoba oil from Trader Joes and one part castor oil (this can be found in the laxative section of most of your standard Targets or Wal-Marts).  It’s all-natural and removes makeup and all other junk. You just smooth onto your dry face at night and then put a hot, steamy washcloth over to steam out all the impurities and rinse. Easy peasy. Your face is clean and moisturized. I had read there is an initial like one to two week adjustment period where your face gets used to non-soap face washing. I fully expected things to go a little wonky which they did at first. I know it’s really important to get all of the oil off with your wash cloth and not to get cold feet in the transition period and start using soap again. Then as time wore on, I started noticing that I was getting pimples not only in my problem zones but also on other parts of my face that have never been acne prone. After two months of having some of the worse breakouts since I had been pregnant (which I’m not pregnant BTW Jessie) and thinking maybe I need to see a dermatologist, I quit oil cleansing. And then my massive breakouts stopped all at once. I went back to my beloved Neutrogena Fresh Foaming Cleanser. Oil cleansing was my nemesis.

If you look at castor oil, it’s really think and gooey. I was spreading layer upon layer of thick and gooey stuff all over my pores and wondering why my face was suddenly so problematic. Castor oil was not my friend. Oil cleansing is not my friend. 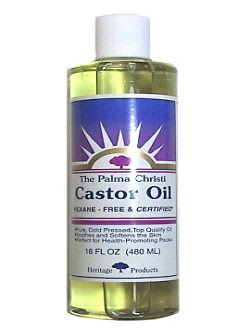 And that’s the tale of the time I did something really bad to my face.
Posted by Kara K at 7:30 AM

Email ThisBlogThis!Share to TwitterShare to FacebookShare to Pinterest
Labels: Kara

Sames. I've tried it a couple different times, and I'm not a fan.

This makes me laugh! Sorry you broke out so badly. I've heard about this, but didn't realize I basically oil cleanse myself. I use jojoba oil to remove my make-up at night (including eye make-up) and only wash my face with a cleanser maybe once or twice a week. We're never without jojoba oil around here! So many great uses.