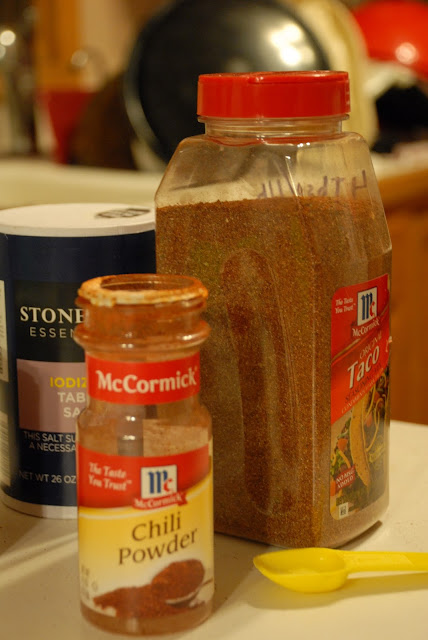 I have a bad habit of doubling recipes and doing the math wrong. Most of the time this happens when I'm on the phone talking to someone or I'm distracted by the little man pulling on my leg to "see, see!" Lucan routinely wants to get a glimpse of what's going on and is interested in what he might be having for supper. I had wanted to make homemade taco seasoning for quite sometime, but had been waiting until our large container had finally run out to replace it. In true Kara fashion, I only wanted to go through the hassle of dragging everything out and measuring once - so let's double the recipe! I had mathematician Lance help me out and had him convert the recipe from teaspoons to tablespoons and from tablespoons to cups. If there's anything I am worse at than converting recipes, it's keeping track of whether I did 4 tablespoons or 5 of salt.

I am really enjoying my homemade taco seasoning for several reasons:
1. I can control what goes into my seasoning and tailor it to my preferences. Do you like yours milder? Cut back on the chili powder. Do you want a little more burn? Add more red pepper flakes.
2. It's cheaper. A LOT cheaper. An individual packet of taco seasoning is usually around $1. A giant canister is priced around $10 at Costco. Making my own? Around $4 after I bought my spices at Aldis.
3. It's a little bit zippy-ier than most taco seasonings, which suits me just fine.
4. Hello - no preservatives!
5. Watching your sodium intake? Reduce the amount of salt in the recipe.

Without further adieu, my gigantic batch of taco seasoning recipe!

Mix well to combine and store in an air tight container. My old taco seasoning canister held my giant recipe perfectly and now I won't have to make taco seasoning for a couple of years. Double win - money saved and time saved!

To use: Over medium heat, brown 1 lb. of ground beef and drain. Add 2 tablespoons of seasoning mix and ¾ cup water to the ground beef. Simmer, stirring frequently, until the sauce thickens and coats the beef, and there is not much liquid left.

Okay, this is genius. Lance is so smart!