There's nothing that I love more than a good celebration. Living life on a budget means that we don't do tons of extras throughout the year for our kids. Aside from special occasions, birthdays and Christmas, my kids don't get a lot of extra toys during the year. (However if you saw my house, you'd think that we give our children toys for every day of the week that ends in the letter "y") I try and make birthdays special because they are just that: special. They're the one day of the year where we focus on that person and how happy we are to have them in our lives.

First birthdays are no exception. I know that there are a lot of naysayers who pooh-pooh large first birthday celebrations because the celebrant won't even remember the party. In my mind, a first birthday party is as much of a celebration of the parents as the child. You are celebrating all of the milestones that all of you have achieved together that first year.

As the momma who gave birth and breastfed the birthday girl for 365 days, it's a celebration of me too! Because if you've breastfed for any duration of time, you know it takes commitment, perseverance and the will not to quit just because it's inconvenient. Maybe it's a bit selfish, but when that birthday candle is blown out, I'm raising a glass to myself too.

I don't think I throw "huge" parties. Yes, all of my kids' birthday parties are themed (Lucan's: crabby first birthday, The Hungry Caterpillar, Milk and Cookies) but they aren't extravagant and they are all DIY. Gracelyn turned one on December 1, so it was easy enough to decide on a "golden birthday" theme with pink accents. 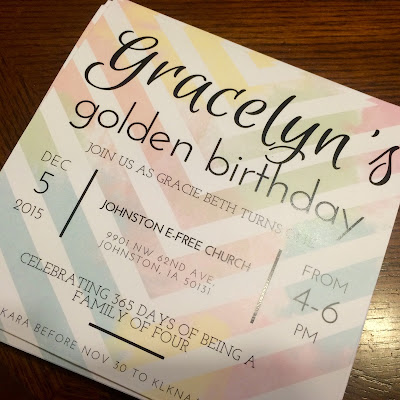 I designed the invitations in canva, which I've become pretty familiar with after using it for work. $2 investment and I was done. Like I've done in the past, I had everything printed at PC Print Center in Urbandale because it's super easy, convenient and they've NEVER screwed up anything of mine before.

One easy way to add color to any party is to purchase colored disposable tablecloths. It's cheap, adds a lot of color and you can throw it away when it's all said and done. Another easy way to add impact is to make your own confetti out of scrapbook paper and a large circle punch. The confetti circles served double duty as I also stuck two together and sandwiched a toothpick in between to serve as my cupcake toppers. I had originally bought cupcake toppers from Hobby Lobby but returned them as I wanted to save a couple of bucks and knew that it would be a cinch to make them myself (or con my mom into helping me make them hours before the party. Because if it's a party I'm throwing, there's going to be last minute stuff to do!) 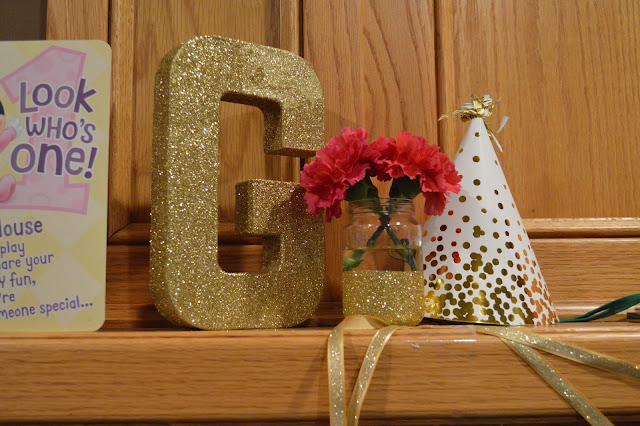 Glitter is like a bug infestation. It gets everywhere and anytime you think you've cleaned it all up, you find more. I glitterized a paper machie "G" which was kind of a process. First I had to spray paint the entire letter gold with two thin, even coats (and by me, I mean Lance. He thought I would end up accidentally spray painting the car. I started waving the can around wildly, which in turn made him very nervous so he took the can from me. It was my plan all along.) Then after the spray paint dried, I layered a coat of decoupage glue and then dropped glitter in small batches all over. THEN after all the glitterizing (yes, there's more) I shellacked the thing with extra shiny top coat.

When I glitterized (yes, I know it's not a real word) the small jars it was about the same process except I started off by taping off the areas that I didn't want glittered with masking tape. I did a layer of decoupage and then glitter and then shiny top coat. 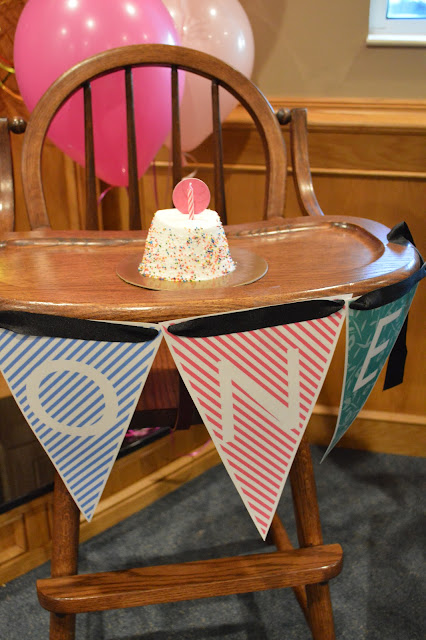 The "one" banner was leftover from Lucan's birthday party. #recycleforthewin 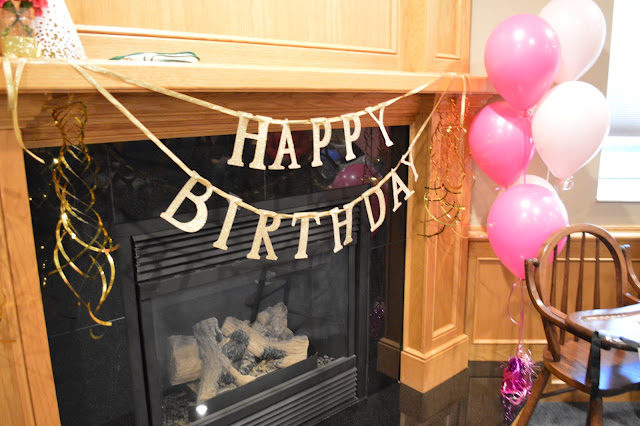 I had a friend make the gold glitter "Happy Birthday" and "Gracelyn" banners using her cricut machine. I'll use them again for future parties. I also think that the use of balloons is another "big impact" item for any party. 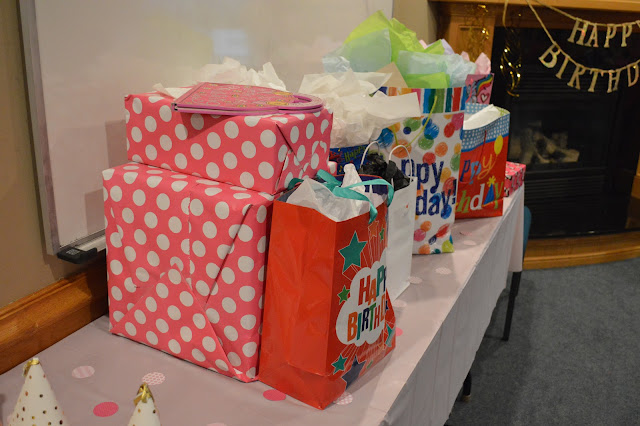 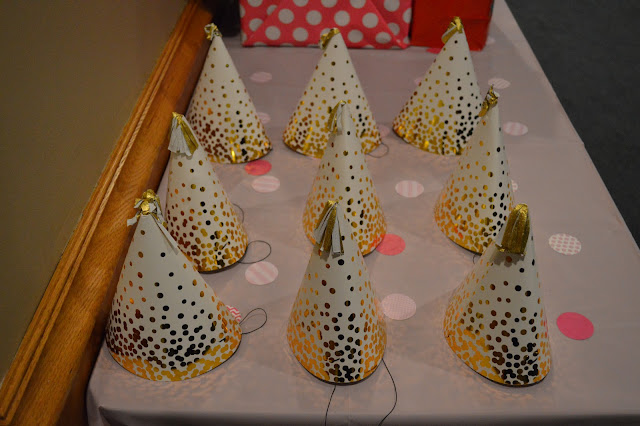 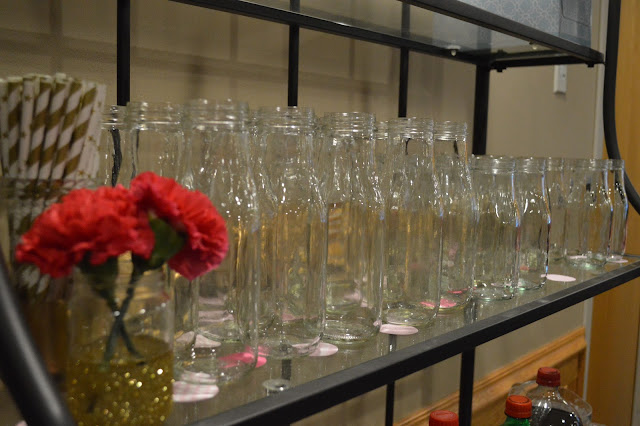 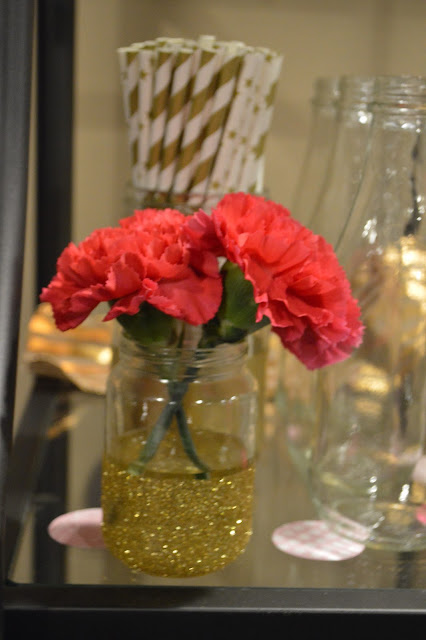 Gold paper straws from Amazon.
The cost of pink carnations was more than I expected or felt was fair. Carnations are supposed to be "cheap" flowers! 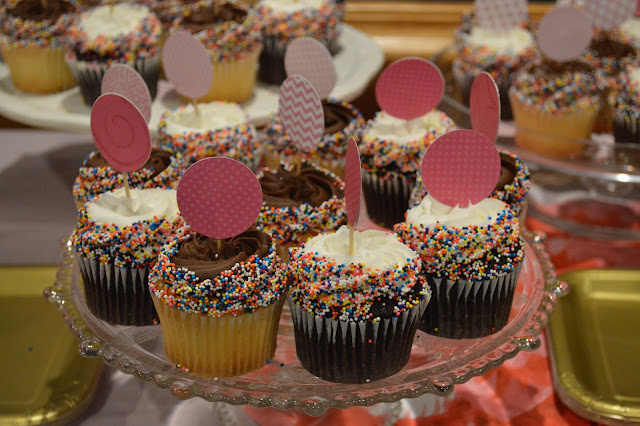 Cupcakes from Target (Lucan just leaned over and said "those cupcakes were DELICIOUS." And he was right. The key is buttercream. Who am I kidding? Buttercream is always the answer.) I borrowed cake plates from my friend Nicole (who has a surprising number of cake plates) to add height to the food table overall. Varying the height of foods on any table adds interest. 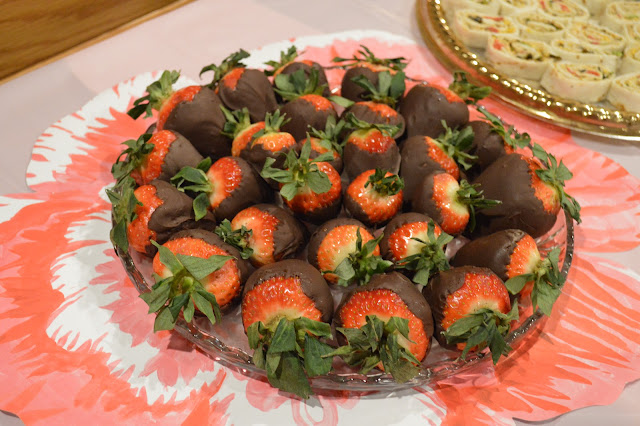 Years ago, pre-budget, I had randomly bought some peony decorative paper items from Target and I finally got to use them for her party! 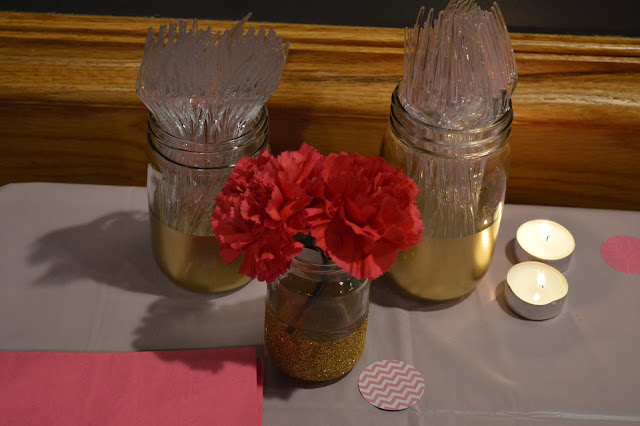 Lance also spray painted some larger jars to be used for cutlery. 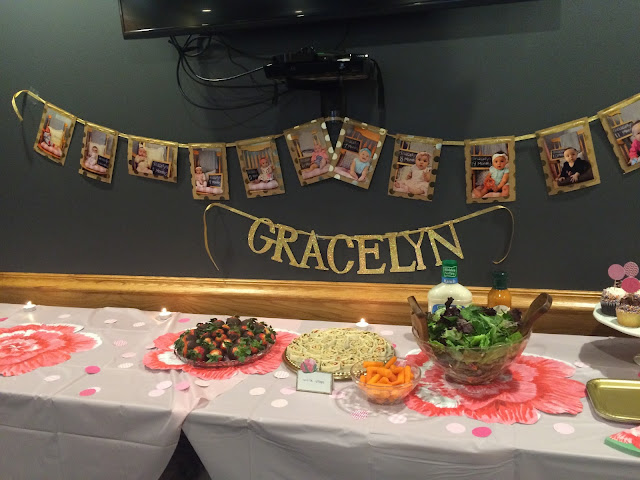 I've been really good about taking Gracie's monthly birthday picture (not so great at making sure I get her monthly post done at the same time, but that's neither here nor there). I purchased gold polka dot card stock and mounted each picture and then strung them all together with gold ribbon for a banner. I always have bright visions of actually having the baby books complete and photo books printed off. Bright visions. Not reality. 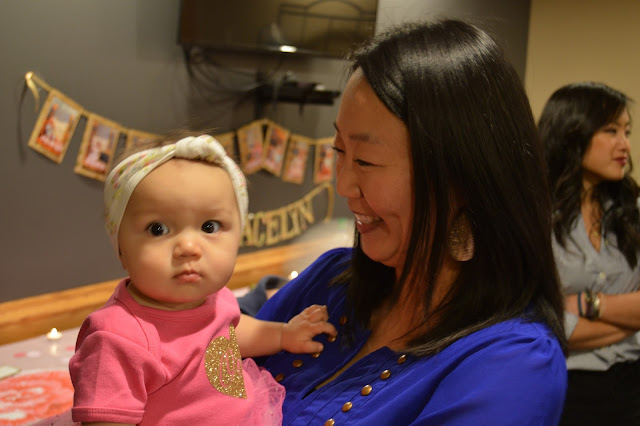 Momma and the birthday girl. 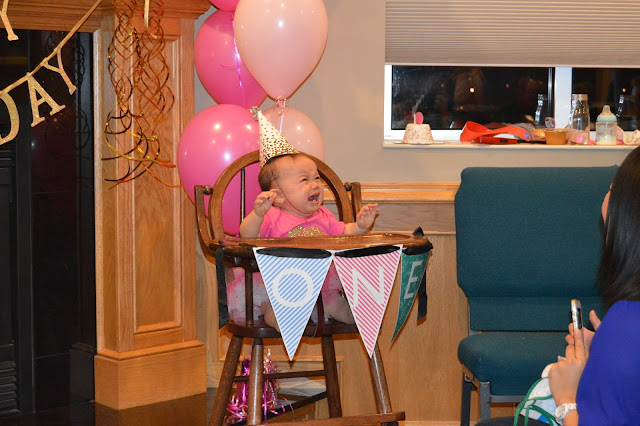 Fun fact: Gracie was not a fan of the party hats. Not at all. This was her face when Lance strapped one on her. It's a good thing I talked myself out of buying her a $20 birthday crown. 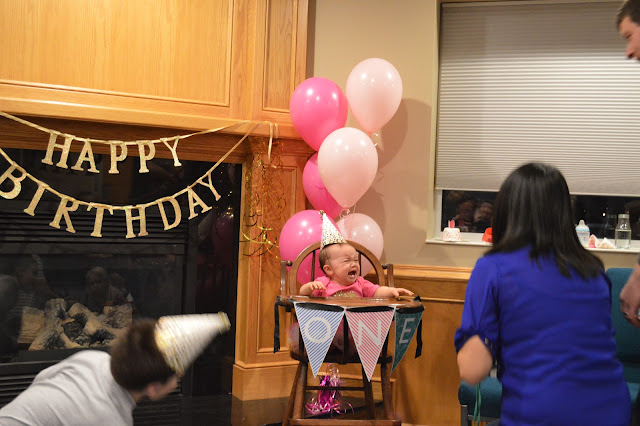 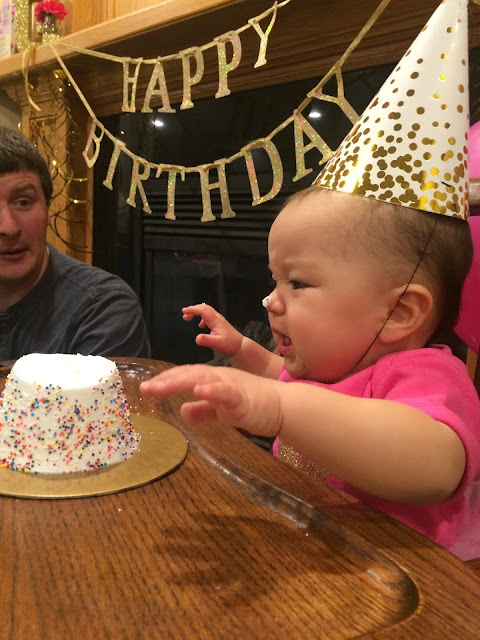 Once again, we have a child who wasn't particularly interested in smashing their smash cake. Lance put a dollop of icing on her nose, but that was about the extent of her interaction. 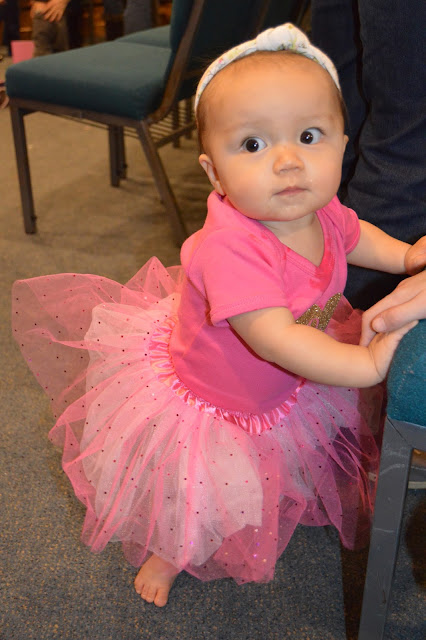 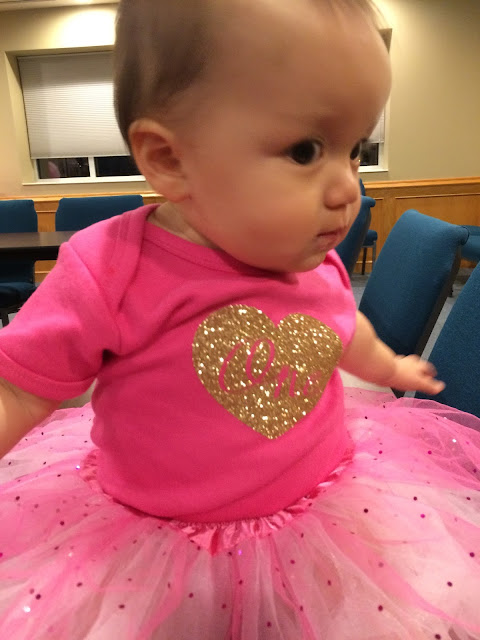 Let's talk about the birthday girl's outfit. I think every birthday girl needs a tutu. Because if anyone deserves to wear a tutu, it's a birthday girl. I surprisingly found this particular tutu at Hobby Lobby. I bought the  pink onesie there too with the intention that I would customize it. Well, like all good intentions, it didn't happen. 10 days before the party I just decided to buy an iron-on off of etsy. Easy peasy. Except it didn't come. And didn't come. And didn't come. The Saturday of the party I had already emailed the seller multiple times and really wasn't getting very far. She had sent me the tracking info but the post office never updated it so all it showed me that it was in Florida until that Saturday morning. I ended up calling our local post office and with ZERO customer service skills they found the package was out for delivery. At 3 pm, our mail was finally delivered and by 3:45 pm our party girl was dressed and ready for her 4 pm party. I know this is a #firstworldproblem but I wasn't keen on getting stuck with a gold glittery heart one and no birthday party to wear it to. 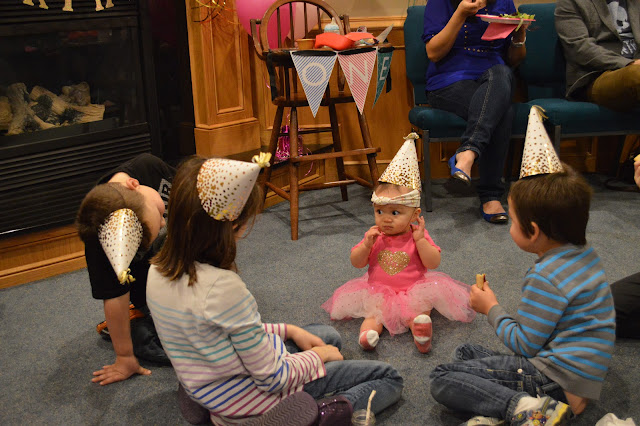 Still not a fan of party hats. Especially over a headband. Thanks Lucan for styling Gracie.

I like to think of myself of getting wiser with age and experience. I'm not sure if it's true, but I like to pretend. Knowing that we would be providing supper to all of our guests, we bought pizzas from Papa Murphys ahead of time. Monday - Wednesday you can get their $5 faves (large pepperoni, sausage or cheese) and on Tuesday you can $10 larges on any pizza. My parents spearheaded the pizza baking leaving us to chat and mingle with everyone. We served a simple salad along with carrots. I bought cupcakes from Target. I did make white chocolate pretzel rods and my mom helped me with the chocolate covered strawberries. Originally I wanted to do some sort of signature drink but Lance quickly insisted that you serve pop with pizza. Lance's aunt and cousin also took pictures for me once the party began so I didn't have to worry about being behind the camera.

I hope you enjoyed your tour of Gracie's Golden Birthday party!

Where was your party? Looks lovely. I do not think 1st birthday parties are ridiculous- they are so important! :o) Everything looks lovely!