Thanksgiving menu: A day of food

Because Thanksgiving is about food. And not about being thankful. Because I have nothing to be thankful for this year. Absolutely NOT true. Although I will take some time to make a list of my thankful things because it is always a worthwhile endeavor.

For the first time EVER, I am hosting Thanksgiving for my side of the family. While some would feel anxious, I just feel giddy. Kara loves cooking and being a hostess-with-the-mostess! I've made two previous turkeys without issue, so hopefully the third time continues to be the charm. We are always out of town for the holidays, so being able to sleep in my own bed seems luxurious. A couple years back we got snowed in for Christmas. It was sad to not be able to see our families but at the same time I remember feeling some relief at doing nothing and going no where. I think that was the last year I made homemade gifts and 300 cookies for Christmas. Apparently overkill is not part of my vocabulary :)

And because overkill is not part of my vocabulary, here is my Thanksgiving menu for 5.5 people:

13 pounds of roasted, brined turkey
Mashed potatoes (because it's not Thanksgiving without mashed potatoes)
Gravy (and not out of a can or a mix. Neither of those two things count as gravy. I remember making the gravy as a new bride at my mother-in-law's and almost ruining it because it was as thick as paste. Then Lance's aunt came to my rescue and thinned it out with some potato water. Which is a helpful hint for those of you who make flour gravy)
Spoon cornbread/cornbread casserole
Bread stuffing (true story: I prefer Stovetop to homemade stuffing. Don't tell.)
Rice & mushroom stuffing
Cranberry orange sauce
Strawberry pretzel salad
Green bean casserole
Pumpkin pie
Peach pie

No relish tray. Really who wants a carrot or a piece of celery on Thanksgiving?! But I may do a cheese dip and crackers as a munchie. I'm also playing with the idea of having a signature drink. The problem being is that a) alcohol is expensive b) it has a tendency to sit in our cupboard for years upon years c) no one in my family is much into alcohol. d) I prefer to eat my calories instead of drinking of them. e) after 9 months of being pregnant and another year of breastfeeding, I have no alcohol tolerance. I would probably be passed out under the table after one drink. I know last year at my work Christmas party my head felt fuzzy after a quarter of a glass of wine. All things point to NOT having a signature drink. But all of my fun Thanksgiving magazine feature so many cool options. Oh well, verdict is out. I'm sure Martha wouldn't approve. Then again, Martha made turkeys out of chocolate last year. That's not going to happen here. But in case you are feeling energetic, here's a link to the video. If you happen to make one, please drop it off at my house prior to 1:00 pm on Thursday :)

Laugh now, all you moms who inwardly chuckled when I said that I was going to hold on to my 2 nap day schedule. Because of course we are now at an one-nap per day schedule. Let me tell you, it's rough. Okay, back story. About 10 days before daylight savings time started (ended?), Lucan started sleeping from 8:00 pm- 9:00 am!! I didn't feel like I could legitimately put Lu down for a morning nap when he had slept in until 9 am. But then daylight savings came and screwed it all up. Lucan is back to his old antics of getting up before 7:00 am. Several mornings I have woken up to the sounds of Lucan knocking everything off his side table and pulling over his side table too.

6:00 am: Thump, thump, thump.
Me to Lance: what the *&#@!# ? (because if you know me, I'm not one to mess with when I'm sleeping) followed by sounds of baby gibberish.
Lance: it's just Lu rearranging. Go back to sleep.
Me to Lance: I'm going to throttle Lucan and kill whoever is in charge of daylight savings time.
Lance (who is already asleep again): hmmm ... go back to sleep...
But like many, once I've been woken up, there's no chance of me falling back to sleep. I could handle the one nap day if Lucan wouldn't get so crazy hysterical at lunch time and if I could guarantee that Lucan would sleep longer than 2 hours in the afternoon. What's done is done. There's no turning back now.


And here Lucan is at 17 months and at 5 months. It never ceases to astound me the changes that one year brings. 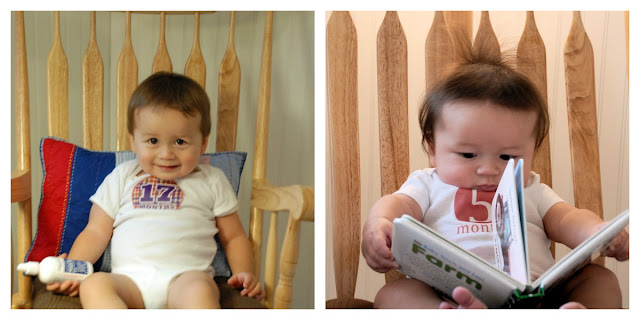 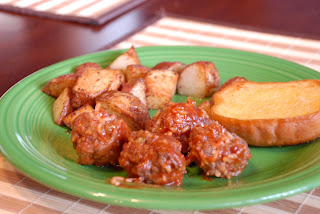 ﻿
I've been having fun cooking my way through Dinner: A Love Story. It certainly helps that I'm home to make supper every evening. One of the few upsides to being unemployed. But if anyone asks, I'm not unemployed, I'm being a stay at home momma to Lucan. So there. I refuse to be an unemployment statistic. Sorry for the tirade. Back to food.

Lucan has interesting food tastes. He loves beans, pears, kiwis, chicken stir fry and meatballs. But not meatloaf. And not leftover chicken stir fry. He loves popcorn. This is a meal Lu LOVES. DALS (Dinner A Love Story) porcupine meatballs. They are on the sweet side, but quite yummy. Def a crowd pleaser.

Whisk together remaining ingredients in a deep skillet (I used my Le Cruset dutch oven) and bring to a simmer. Drop in meatballs and cover tightly. Simmer for 30 minutes (for the rice to cook through, it was closer to 50 minutes), flipping over about half way through.
Remove cloves before serving.
I serve with oven fried potatoes and garlic bread. A lovely green salad is also reccommended.
Posted by Kara K at 7:30 AM No comments:

October was an expensive month for things. Meaning, Lucan's nimble little baby fingers were too fast for his own good. Things Lu broke this month: nightlight (into two pieces), ipod (who knew tiny droplets of water would be so lethal), my skunk salt shaker, ceramic measuring spoon and his floor fan. Things that I broke: passenger side mirror on the Traverse and our GPS. I don't think that the GPS was really my fault. It just failed to power up when I was in the middle of Altoona. The passenger side mirror was completely my fault.

Anyway, I'm not bitter. Well, not too bitter. Moving on.

This is Lucan in his scarecrow costume at my parents' house. The white blur you see on the left side of the picture is their kitty, Annie. Annie and Lu are the best of buds. They really enjoy playing with each other. Lucan chases after Annie and Annie thinks it's great fun. Annie gently gnaws on Lu's fingers and Lu thinks it's hilarious. After a weekend with Annie, Lu finds Fire to be quite the bore. If Lu shrieks loudly, Fire just runs and hides where Annie takes it as here cue to be even crazier. 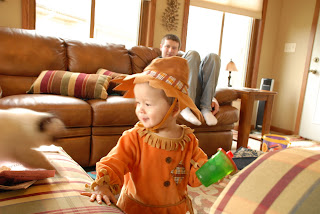 We went with the Des Moines Mom's group to Center Grove Orchard. The morning we went there was quite unusual weather wise for October. Warm enough for shorts and just humid enough to feel like springtime. On the flip side, it was quite muddy by all of the animals so Lu's shoes quickly got caked with mud. Lu and I had fun, but I think that he'll enjoy it more next year when he can not be afraid of the corn pool and can go down the big slide. I also will have to pay attention to the weather and pick a dryer day.﻿ 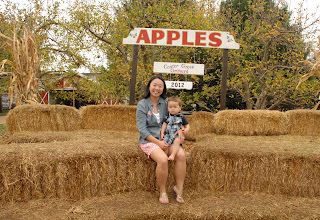 Ah, a family picture at Lance's youngest brother, Andrew's, wedding. ﻿The whole day was kind of a fiasco with very limited napping and a lot of me saying "no, Lucan, no." Of course he wanted to get into everything and always be with his dad. That was tricky as Lance was in the wedding and had best man duties and such. Needless to say, I'm hoping that the next wedding Lance and I are in, Lu will be old enough to not be so crazy. 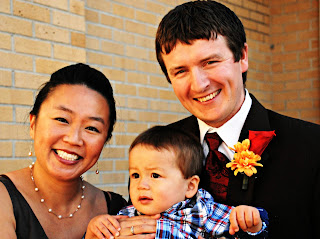 Here are two pictures of our little cousin, Easton, completely passed out on Lance's uncle Raymond. Easton is just a month older than Lucan and had troubles too keeping out of everything. The only nap poor Easton caught was during the ceremony. ﻿ 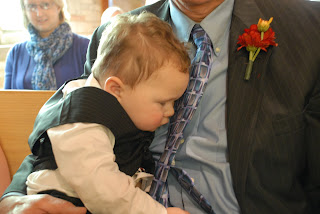 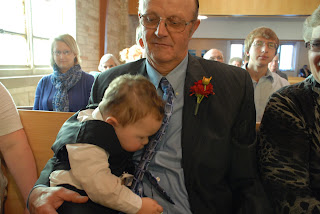 Our niece, Andrea, was the flower girl. She did very well and stood through the ceremony without issue. Doesn't she look so pretty and patient?﻿ 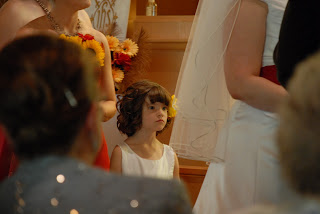 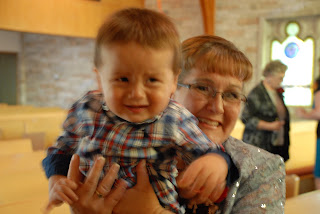 ﻿Lucan loves any meal that involves beans. This night I made taco soup. Doesn't Lance look uber-enthused about being in the picture? 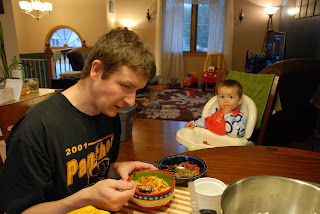 Lance legitimately thought this outfit looked good on Lu. Orange striped onesie totally goes with crazy madras pants that have no orange in them, right? Never mind the fact that I'm letting Lucan go down the stairs unassisted. We both know that I'm the better of the two parents :) 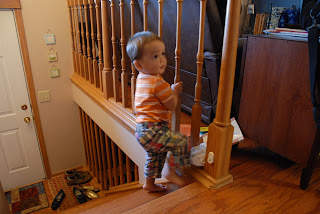 Speaking of good parenting, I'm not letting Lucan use the cube cooler as a step stool so he can flip the lights on and off and throw things over the gate and down the stairs .... 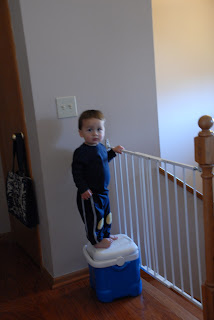 Crazy baby. This is his ferocious face. 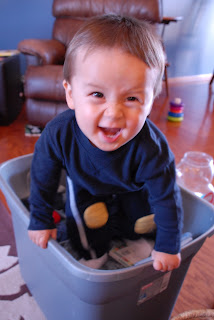 And Lucan standing in a pile of clean, unfolded laundry. Totally safe. 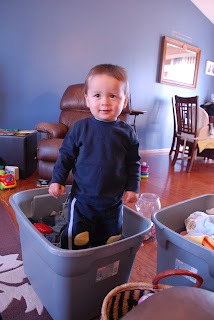 Lu has decided that the baby swing is much more comfortable as a 17 month old. I'm not sure the swing has a capacity to hold 25 pounds, truth be told. I think Lu just wants his own seating that fits his body. 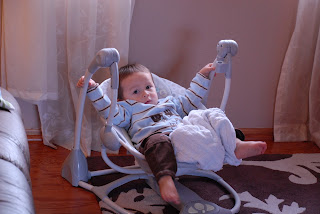 Go Iowa State! We all had our ISU gear on, so a picture of course was in order. We have to celebrate our victories when we can get them!﻿ 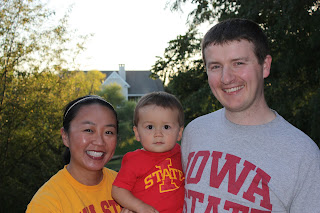