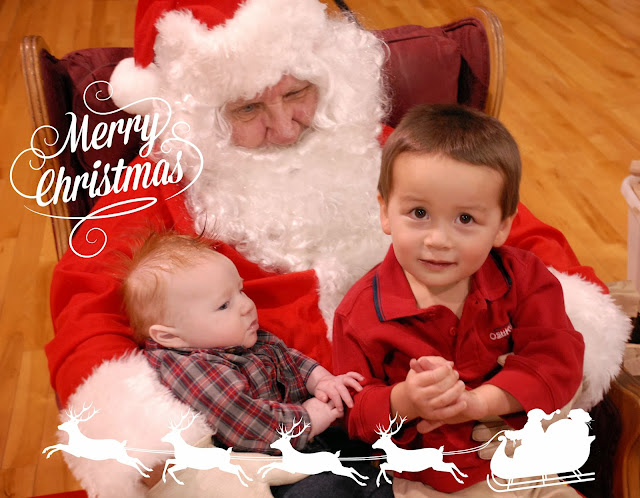 Merry Christmas to all, and to all a goodnight!
(PS: the baby is Lu's cousin, Ean. We did not have another child and just fail to mention it)
Posted by Kara K at 11:30 AM No comments:

30 Things I'm Thankful For in November

1. Nicole Forbes, Stacy Scholten, Rachael Thompson and Annalise Kitchen - aka the Hospers 5 :) We had a RA reunion the first weekend in November and it was fan-freakin-tastic. Laughter, chaos, scarf exchange, Starbucks, pedicures and cheesecake. What more could you want? (Maybe more time with them and seeing them more often. And perhaps Carrie so we could complete the Hospers 6.)
2. Jimmy Johns lunch with gal-pal Erika
3. Free grandparent babysitting for date night
4. DATE NIGHT consisting of Keith Urban/Little Big Town concert and Zombie Burger. Best date night in the history of date nights.
5. Lance's mom babysitting Lucan for three days while daycare was closed. SO grateful for her and Lucan got some cousin time in there too!
6. Winning a gorgeous pair of Stella and Dot earrings. Out of 1152 entries. I know Rae Rae, I win a lot of things!
7. Because I also won a smallish gift basket in a raffle. Much less exciting - soup mix, vitamins, lotion.
8. Is it lame to be thankful for modern medicine? I had my first UTI and I thought that it was going to kill me. Therefore, I'm super thankful for antibiotics.
9. Crockpot apple butter. I'm still canning. Going on month four of canning. Ridiculous. My basement looks like I'm preparing for a bomb shelter apocalypse.
10. We had customer service week at work and I entered into the popcorn art contest and made a turkey. It got me a 2nd place finish and a $20 gift card to Fong's Pizza.
11. I'm thankful for all of our family being within driving distance of each other. While two Thanksgivings makes for a ridiculous amount of food, it's nice that we're able to see each other.
12. Lance went to the last Iowa State football game. I'm thankful that I didn't have to go and got to stay inside instead.
13. Mornings in our house are hard. None of us are morning people and Lu doesn't really appreciate being woken up early either. One morning I came in after Lucan finished telling Lance to "shut the door." I asked Lu how he was doing and he told me very sweetly, with his blanket pulled over his head, "I sweepin' (sleeping) mommy." I told him that was fine but in a couple of minutes he was going to need to get up. And that was that. So I'm thankful for a little morning sweetness.
14. Chik-fil-A.
15. Fluffy duvet covers and extra warmth.
16. Our super-duper Dyson vacuum and the excellent job it does.
17. Christmas music all.day.long.
18. Yoga. The chance to unwind, sweat and breathe.
19. Sweet Saturday morning sleep-ins.
20. Mega Blocks par-tay!
21. Laughter and conversation with an impromptu girls dinner at Granite City - because it's Jessie's favorite and I think I've been there with her 3x now!
22. My parents anniversary - their 43rd!
23. Our military personnel. One of my co-workers was deployed this month for active service. We are also signing holiday cards at work and mailing them to soldiers overseas.
24. Gobble! Gobble! Lucan and I have been working on our gobbles in the car. He still thinks that turkeys go "bawk! bawk!" But I think that remnants of Halloween and dressing like a chicken :)
25. Our kind friend, Rose, who took some family pictures of us in October, recently had a health scare with her mom who was in a random accident while on vacation. The news did a cool story about how their small farming community banned together to get their crops in while her dad flew down to Mexico to be with Rose's mom in the hospital. Her mom is doing SO much better, but it makes me grateful for my own mom and makes me proud of the farmers in the area we grew up. This is a little side story about Rose's mom: when Rose lost her baby son, Trace, Lance and I wanted to bring food to Rose's family. Even though Rose lives in the "area" we didn't have a clear idea of how to get to her house. So we hoped for the best and only drove an extra 15 minutes out of our way. When we showed up on Rose's doorstep, we were relieved to be there. Rose's mom answered the door and said that Rose and Scott went out for dinner for Scott's birthday. She stared hard at us for a moment and then said, "Oh! I know who you two are! You're Lance and Kara!" I was really surprised that she recognized us, but I guess I shouldn't have been. Lance, Rose and I were all in 4-H together in high school and Lance and Rose were king and queen together at the Woodbury County Fair :) And I was the queen the year before Rose and encouraged her to give the contest another go. So we all have a bit of history together. (Sorry, that wasn't all that short) But I always recall Rose's mom for being really sweet and good at names/faces. There's not too many people who would be able to figure out who two strangers were who showed up unannounced on their daughter's doorstep after not seeing them for 9+ years!
26. I'm grateful to not work in retail on Black Friday. So grateful. I worked at Younkers during Christmas my senior year of college and it was awful. Like ending a shift at 10:30 pm and turning around and being back to work at 6 am the next morning.
27. Snow. I said it. I'm thankful for snow. (don't tell Lance. He's a scrooge when it comes to snow)
28. My handy husband. I know I was thankful for this last month too, but after 5 months of having no working windshield wiper fluid in the Traverse and him procrastinating taking it to a "real" place to have it fixed, he spent 20 minutes in the garage and replaced a small $1 fuse. I'm thankful, but I might have been more thankful 5 months ago.
29. BOGO Starbucks holiday drinks
30. Short work weeks!!