I had a woman who was in her mid-sixties say to me “don’t you just love being pregnant?!” I almost slapped her. Because NO ONE is head over heels in love with being pregnant and this is coming from a woman who has had relatively easy pregnancies i.e.: no vomiting.  It is pretty cool to be able to house a human life and be its “person” for nine months. But by the end you just so over it. My body aches after sitting too long, after standing too long and after lying down too long. Basically my body just can’t get comfortable.

How far along: 38 weeks as of Thursday, Nov 20. I’m getting a little tired of people taking one look at me and going “woah … you must be due any day now.” Yes, I know that my belly is completely torpedo shaped. Let’s talk about the shape of YOUR body.

Total weight gain: I’m not really certain. It always seems like I gain weight in the first month and then lose a whole bunch and then slowly put some of it back on. I’d put myself somewhere around 10-13 pounds of belly.

Maternity clothes:  All day, every day. Except for a few pairs of fleece pants and yoga pants. Life is becoming tricky with the incoming cold weather and 75% of my wardrobe being maternity dresses and jeans. I need to have this baby soonish because I’m out of pants that fit me.  And I can only wear my black maternity leggings so many days in a row. It would be nice to have a legit winter coat to wear too…

Gender:  baby girl named Paco. Paco is really sticking with Lucan. Although we gave him a few name choices the other day and he did like a couple of them. But how can we really trust a three year-old who wants to name his sister Paco?

Movement: things are getting tight in there. She regularly gets hiccups in the evening and likes to rotate and stretch periodically. It’s always really amazing to feel a butt or an elbow or something pointy sticking out. It’s amazing and it hurts all at the same time. Sometimes it feels like baby girl is standing on my left hip bone. My hips, overall, are always achy. But my lower back hasn’t given me as much trouble this time, so for that we say AMEN.

Sleep:  Pretty good. I usually have to get up once a night to pee and that’s it. But the last two nights have not been restful. The battery in the smoke alarm in our bedroom started beeping around 2:30 AM and then Lance had a dream he was slam dunking a basketball and woke both of us when he started thrashing wildly and hit our headboard really hard. Last night Lucan was convinced it was thundering out and came in our room at 5 AM (it was just really windy and blowing noisily). At 5 AM he just wanted to chat so Lance finally put him back in his bed so we could get a bit more sleep.
Rolling over and getting out of bed continues to be challenging. I don’t remember feeling like this last time.

Insomnia has been fairly infrequent. Sometimes I struggle to fall back asleep after I pee which is annoying, but it hasn’t been bad.

What I miss: being able to walk without my hips feeling achy. Stupid stretching ligaments. Going to the chiropractor has definitely been helping, but I suppose having the baby will be the most helpful thing.

Cravings: Salad with peas. It’s weird, I know. I ate 2 tuna salad sandwiches last night without batting an eye. But generally, there’s less room for food because there’s less room in the inn overall. I’ve also been craving this drink from Outback Steakhouse called Wallaby Darned. It’s probably been 8 years since I’ve last had one but by golly, they sound amazing right now!

Nursery update: we are like 90% of the way done. Room is painted. Crib is up and sheets are on. Dresser has been relocated from downstairs to the nursery. Curtains are hung. Paint chip garland is hung (but I’m still contemplating some unnecessary revisions). Doo-dads are slowly being added. I’m still in the process of putting away and washing pink clothes and the closet could really use some work as there is NO ROOM presently for any of pink stuff to be put in there. She’ll have to share her brother’s closet.  But we’re really close. Which is good since le bebe could come at any time.

Mommy thoughts: I’m slowly losing my mind. Most of the time I can’t find anything and then I make bets with Lance and he finds things in about twenty seconds. It’s infuriating. Lost things that I haven’t been able to find and Lance finds later on: black yoga pants, gray fleece pants, my phone, paint samples. I truly thought I was losing my mind when I texted a friend and discovered she had a couple of the things I had searched all over for. It was nice to know I wasn’t crazy. Between trying to finish the nursery and organizing three rooms of stuff into two rooms, the house is a disaster. I think the reason I keep losing stuff is because it’s 50% baby brain and 50% utter mess. #notmyfault

We took Lucan to a Big Brother Preparedness class in which he missed the beginning because he threw a fit and had a timeout in the car. I really don’t feel prepared to give birth, at least not like I did last time. I haven’t read any books and I have been really lax about most everything. I keep banking on the fact that because I’ve done this once before, I should be able to navigate my way through it a second time. At least in theory. I finally decided that I’m going to have this baby at the same hospital that we had Lucan mostly because labor and delivery is such a crap shoot that it might be nice to have ONE thing that is familiar. I should really mail in my pre-registration info. But everyone’s bags are finally packed and the car seat has been cleaned and is installed.

There’s no room in our deep freeze for me to do any freezer cooking. For real. We have a gigantic stand-alone freezer and there’s no space to put anything in it. Could be the box of bacon, the side of beef, the massive amount of chicken I bought on sale, the strawberry freezer jam, freezer corn and tomatoes. I’m not sure what we’re going to eat when baby sister makes her appearance – corn and jelly?

Message to baby: Hi little sister! What do you want to be named??

I’m 31 years-old, relatively sane, semi-functional, contributing member of society. I have no massive hang-ups, have never been to jail and don’t seem to have any major debilitating personality flaws. And I’m adopted. I actually consider it to be a very minor part of who I am. First – sinner saved by grace, wife, mommy, daughter, friend, employee. Lover of chocolate. Iowa resident. And so on and so on. The list goes on. Somewhere near the bottom of the list I remember that I’m adopted, which isn’t a big deal. The bigger deal is that I was raised in a household by two parents who loved me and never treated me any differently except like their beloved daughter.

I’ve known my entire life that I was adopted. It doesn’t take a rocket scientist; I’m quite Asian and I have two very Caucasian parents. I have one distinct memory of being 6 or 7 and having an older person whisper in front of me; to my parents “does Kara know she’s adopted?” I remember thinking “wow, you’re an idiot. Of course I know. And if I didn’t know, I would certainly know now!”
If I have to say anything about being adopted, it was growing up in a small town with relatively few Asians. It made me different, but it had less to do with being adopted than anything. I think, to some extent, this is less of a problem in today’s world than the world that I grew up in. Families come in all shapes and sizes.

I acknowledge that my family’s adoption situation was one of the more “ideal” scenarios – I was adopted at the age of three months; it was a closed, international adoption; I didn’t have any health defects; and because I was an infant, I have no memories of being in an orphanage or my birth family. Not knowing my birth family has never really bothered me; I already have great parents. I know that there are adoptees that are more curious about their heritage in comparison to me. And that’s great, but my life is complete as it is. I have no additional desire for self-revelation or discovery. Maybe I’m mundane but I’m never had some soul searching quest for “more.”

I have about a handful of friends who are going through the adoption process or have added to their families by way of adoption. I think it’s fantastic. But I also know of a few who are hesitant to mix up their family dynamics with a child who isn’t genetically “theirs” per say. This is absurd because we all know that when it comes to children, we get the child God intended for us, regardless of genetic disposition. I think one of the nicest things I ever had said to me was by my 8th grade science teacher. He and his wife (also one of my former teachers – 7th grade math –not one of my better subjects, even as a junior high student) had recently gotten married and were contemplating adoption. I know they were going back and forth and in passing my science teacher said to me “Kara, if I knew we could adopt and they would turn out as well as you, we would.” And when I was in high school, I got news that they had adopted a little girl from Russia. This has stuck with me for 18 years. I can’t say if I really had anything at all to do with their adopting, but I like to think that I helped them make a “yes” decision.

So November is National Adoption month, this is my adoption story and me giving a big huge high five endorsement to adoption. I became a naturalized citizen June 3. My parents used to have a small celebratory party for me every year on June 3. On June 3, 2011 I had my first child. Make no mistake this is exactly what God had planned for me. If you are thinking about adopting, just go for it. Looky at how "normal" I am! :)
Posted by Kara K at 11:56 AM No comments:

Email ThisBlogThis!Share to TwitterShare to FacebookShare to Pinterest
Labels: Kara

10 Things to Treat Yourself to in the Third Trimester

One unofficial thing I love doing now that the nursery is “done” is sit quietly in the rocker and pray and imagine life with this little one. Life, right now, is anything but quiet so the serene quality of the nursery is especially soothing on this anxious mama’s nerves!
Posted by Kara K at 6:00 AM 2 comments:

What’s in your wallet (or work bag)? 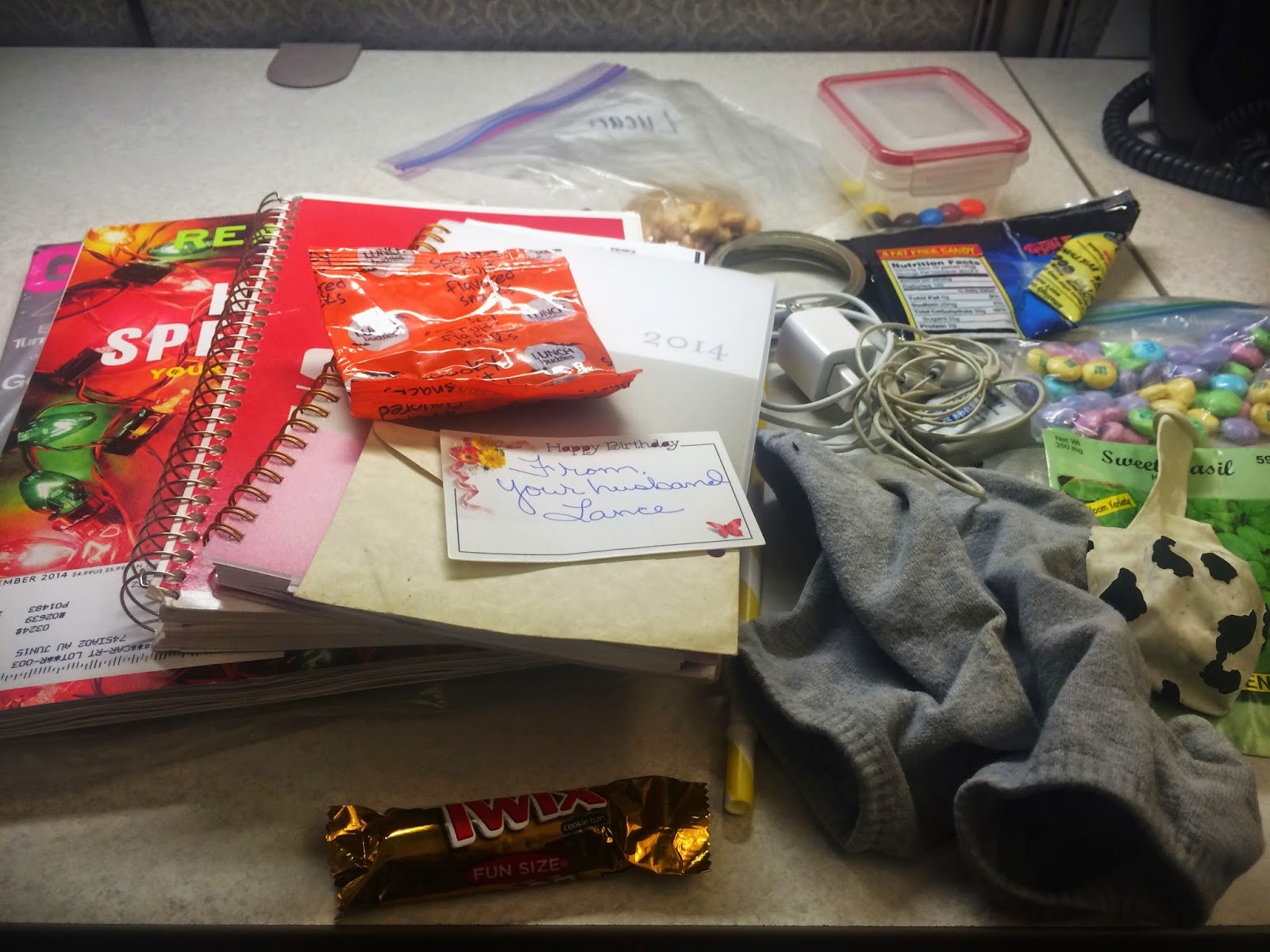 I think the moral of the story is that I need to clean out work bag more often. And throw away more candy. I had a male co-worker tell me once how odd the amount of crap women tote into work with them because in his exact words “everything they need to do their jobs is already at their desk!” In my case, he may have a point …

Yes, my first post in almost a month. I'll work on doing more meaningful content soon-ish.
Posted by Kara K at 9:22 AM 2 comments: