What to make for Cooking Club?

Cooking club is next Wednesday and the theme is "Something New." That just leaves me wide open for all sorts of funness. Here are a few ideas that I'm tossing around
Corn Fritters. They look scrumptious. 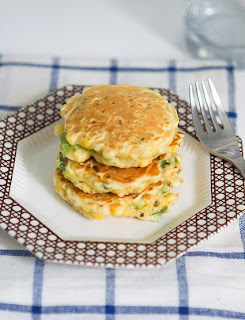 Chicken Pot Pie. This might be a little labor intensive for food club. But this looks mouth watering! 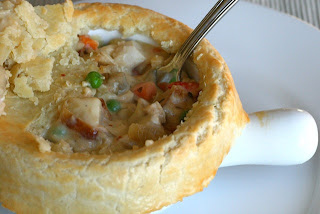 Caramel Apple Cheesecake. I vowed that I wouldn't have any more interaction with apples after making applesauce. I may have to renege. 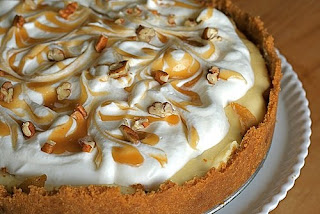 S'mores Cupcakes. What's not to love. 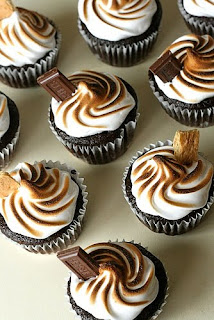 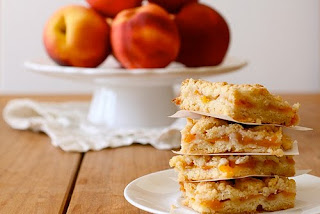 Sigh ... too many treats, not enough time to taste them all!
Posted by Kara K at 7:26 AM No comments:

Down on the Farm

Here are a couple of pictures lurking from Labor Day weekend, out and about on Lance's family's farm. 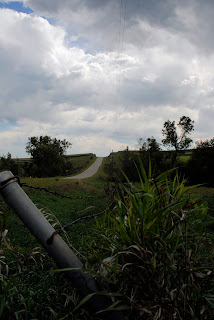 I like the leading lines and the overall composition of the photo. 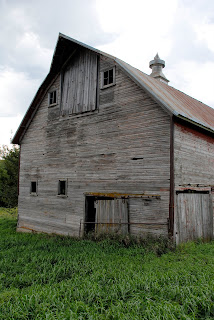 I like old barns. Lance - do we have room in our backyard for one of these? 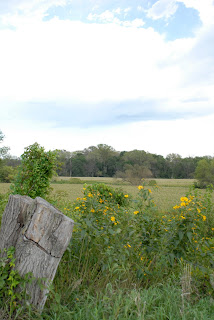 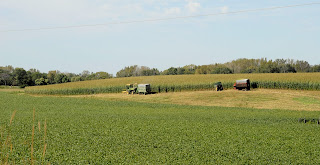 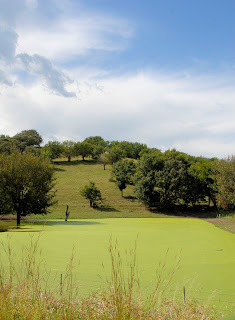 I was a little obsessed with the clouds. And the algae pond. Who doesn't like a refreshing bath of ... algae. 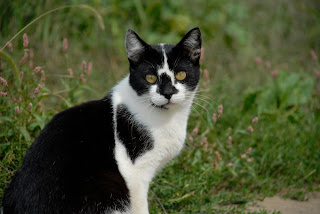 My brother-in-law's unnamed, untamed cat. He was very cooperative in the photoshoot.
Nothing like some nice country shots!

Email ThisBlogThis!Share to TwitterShare to FacebookShare to Pinterest
Labels: landscapes 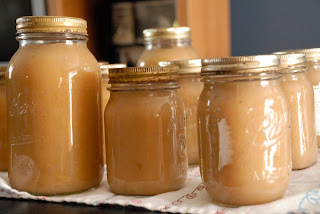 Canning applesauce is not for those who travel on weekends and hold down full-time jobs. I also don't think that canning applesauce is for those who have wee ones (not I). Therefore, I'm not exactly sure who that leaves. I suppose retirees and those who don't have children at home. Well, give me another 40 years and maybe I'll fall into that category. Oh, funny side note about about retiring. Costco slightly messed up my graduation cake by putting "Happy Retirement Kara." When Lance went to pick it up he thought that I might have put that on the cake as a joke. But then he ready my order sheet that clearly stated "Happy Graduation Kara." I guess someone at Costco knew my secret wish - retirement at the age of 27. Who knew they would announce it in chocolate buttercream? :)
Anyway, much like my thought process, I digress. Applesauce. If I didn't love the homemade version so much, I don't think that I would have devoted the time to make it myself. Lance and I have determined that by the time you factor in your initial start-up costs (canning jars, flats, rings, a canner, canning equipment), the cost of the raw product and then factor in your time, homemade applesauce is just not a good investment. Granted we were fortunate enough to have been gifted a canner and canning equipment from my mom and were also gifted jars, flats, and rings from my mother-in-law. We had zero equipment costs and were given apples from Lance's aunt and uncle. I guess what I'm leading up to is that even though we virtually zero cost invested, making applesauce is a ton of work and canning applesauce is just as much work. All in all, a single batch would produce roughly 7 pints and take us 2 hours from start to finish. TWO HOURS. That's a lot of labor for a measly 7 pints. I'm going to include a few takeaways, it's going to take me a solid two years before I forget how labor intensive applesauce is and attempt it again.
1. Use a heavy-bottomed pan. No, I am not referencing a pan with "junk in it's trunk." A heavy-bottomed pan will reduce the likelihood of scorching.
2. My MIL does not peel her apples. She allows the apples to cook down to mush and then runs it through her blender. For us this was about a 30-45 minute process. I took a page out of her book and didn't peel my apples either. I did however blend them with my immersion blender (yay for the handy-dandy immersion blender) and then run them through my new meat grinder. Note to self: remember to remove one of the meat grinder screens prior to beginning. It will take ages if you forget this ...
3. Regardless of Lance stating that he does not want cinnamon in his applesauce and that he DOES NOT LIKE cinnamon, add it anyways. It tastes better and Lance will eventually admit this too.
4. Fruit flies will inevitably be attracted. They gross me out. One all-natural way to catch fruit flies is to pour a little apple cider vinegar into an empty beer bottle and drop in a little dish soap. They like it and then they die in the liquid.
5. I've read on several websites that the quality of your applesauce is dependent on the quality of your fruit. This, in my opinion, is a little bit of crap. Lance and I used farm apples. I used ones that had bad spots in them. Granted, you must cut the spots out, but there's nothing wrong with "seconds." There's a reason why you are grinding the apples down and cooking them into mush. You will not notice that your applesauce was produced from seconds unless you fail to cut out the bad spots. Then you are just straight up lazy.
6. When canning, make sure that after you bring your water to a boil, that it remains at a slow boil. I thought that I ruined our last batch when none of the cans from that batch popped before we went to bed. By the next morning they had all popped, but I was concerned by my lack of attentiveness.
That about summarizes my tips. Needless to say, I do not anticipate anymore applesauce in my immediate future. But knowing me, I'll have a hard time saying no to cheap/free fruit and find myself in another applesauce canning bind :)
Posted by Kara K at 7:45 AM 2 comments:

I have the day off. The house is a mess. We got back last night from a weekend in the Twin Citites with a baseball game, shopping, and more shopping at IKEA and ... the Container Store. My heart goes pitter patter for the Container Store, but that's a story for another day. Lance and I canned 5 lbs of apples into applesauce last night. We have roughly 35 lbs of apples left to can. I've never canned before. Yep, that's a story for another day too. I'm planning on making homemade Larabars later today - recipe for another day. I'm also planning on grinding some round steak into hamburger - another tale for another day (BTW: isn't a meat grinder a completely normal impulse purchase?) The best you are going to get from me is my Monday Menu Plan. 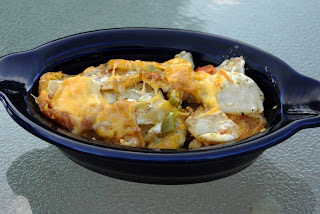 Growing up in NW Iowa, my family spent a lot of time in Omaha, NE. Both of my aunts live in the Omaha area and any special shopping my mom would do with me would be in Omaha. Because of this, our family had a couple of favorite restaurants in Omaha. One of those restaurants is The Garden Cafe. The Garden Cafe is known for their breakfast menu and their potato casseroles. Dear me, how I love their potato casseroles. The secret is the ranch salad dressing. I know, sounds a little lame and more than a little unhealthy, but I really believe the secret is Ranch salad dressing!


Like usual, I worked off a very loose recipe. Meaning, I had a mental list of ingredients in my head and then eye-balled it.

I started by prepping all of my potatoes. I then panfried them with a dab of canola oil in a skillet with the onion. While I was doing this I also sprinkled on the S&P and the oregeno. Then I transfered half of the potatoes into a casserole dish and layered all of the veggies and the ranch. I topped it with the remaining potatoes and popped it into the oven for 20 minutes at 375 degrees. During the last five minutes sprinkle a little cheesy love ontop of it!
Posted by Kara K at 8:01 AM No comments:

Email ThisBlogThis!Share to TwitterShare to FacebookShare to Pinterest
Labels: Food 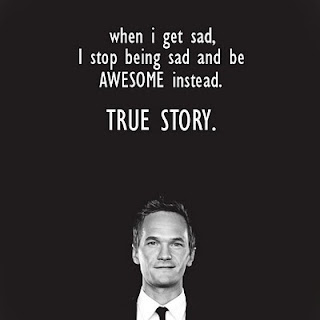 Oh Barney Stintson. You are too much.
Posted by Kara K at 8:40 AM No comments:

I stumbled onto this videographer's website - he's amazing. This video - also amazing. If I a) lived in Cali b) had a reason for a videographer c) wanted something special made, he would totally be my go-to choice.

Anyway I wanted to share. I thought the video was really beautiful and moving. 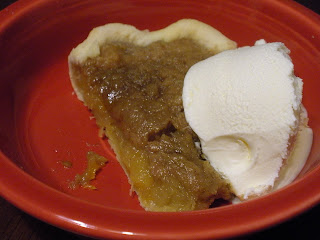 Do you have a signature dish? No? Isn't it normal for every 27 year-old to have a signature dish? :) Anywho, my signature dish is a Pineapple Apricot Pie. I made this as a high schooler for 4-H and took it both as a project and for our county pie auction. According to my MIL this is a n0-no. Opps... I have made this pie for family occasions and I made this for Thanksgiving as an RA too. It's a winner, either as a double crust pie or as a single crust pie with a crumble topping. Usually I make the crumble topping when I've completely botched the second layer of pie crust. Like all pies, this pie is perfect warmed and served with a scoop of vanilla ice cream. YUM!
1½ cup Dried apricots
1½ cup Water
6 tablespoons Sugar
1 can Crushed pineapple (8 oz)
1½ tablespoon Cornstarch
Salt
3 tablespoons Butter

Hi all! Lance and I had the privilege of going to the ISU versus N. Illinois game on Sept 2. First game of the year and it was a beautiful game! Granted I should have been smarter and not worn shorts to the game, but that was my only issue. We were fortunate to have club seats, which meant catered food. Yum. I'm really starting to enjoy my football tickets :) Here are some pictures from the evening. 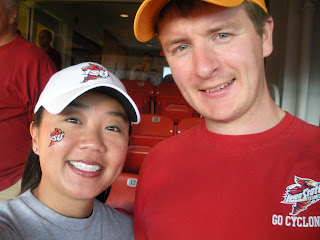 We love going to games - I love football season in general. Granted, I prefer football games that include fall weather, crisp leaves, tailgating, and winning scores :) 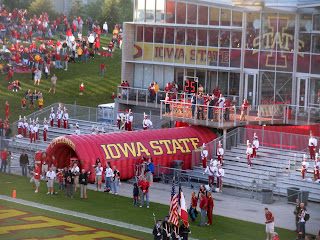 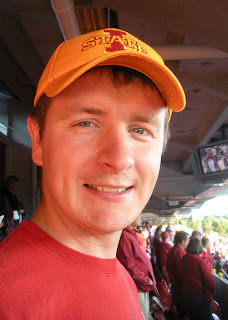 I ate a Clone Cone. They are loaded with food coloring. I dripped a little on my gray shirt and the damage was totally noticable! 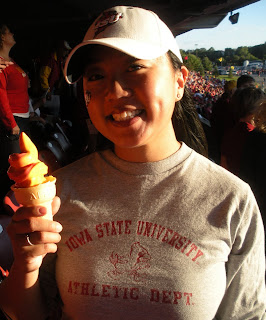 This is where are seats were located. AWESOME! 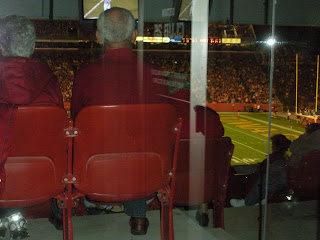 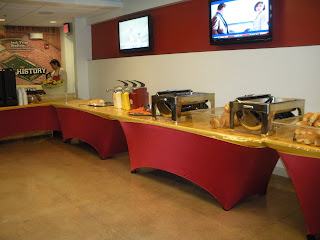 Isn't this a perfect day? 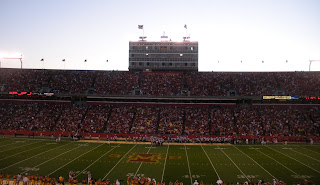 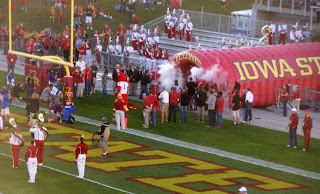 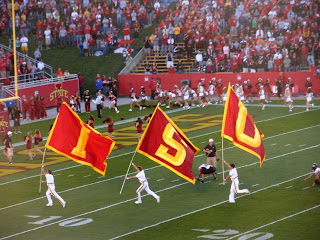 I really enjoy the marching band shows. I'm a little bit of a nerd. I actually confessed to Lance they were my favorite part of the game. He just rolled his eyes at me and said "Yeah, that figures." 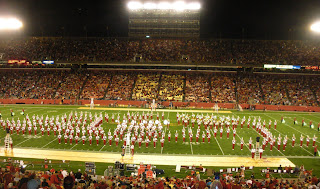 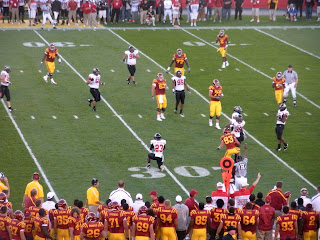 Don't ask me what's going on in these photos. I just figured I should include some action shots. 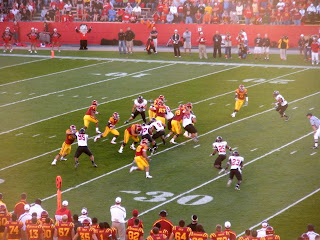 All in all, this is going to be a bumpy road for Iowa State football, but we're fans for life!
Posted by Kara K at 11:59 AM 1 comment: 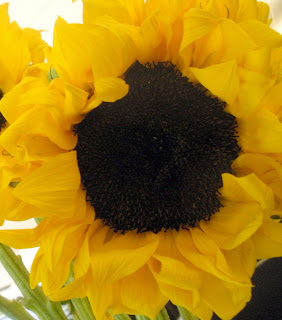 Lance considers sunflowers a noxious weed that should be cut down. My mom considers them to be decorative and a nice treat for the birds. I tend to err on the side of my mother. My co-worker had these gorgeous sunflowers on her desk last week. I was more than a little jealous. She had a friend over for supper and as a thank you, the friend brought her sunflowers. Not that I expect my dinner guests to bring me flowers, but I wouldn't turn these down!
Posted by Kara K at 8:01 AM No comments: