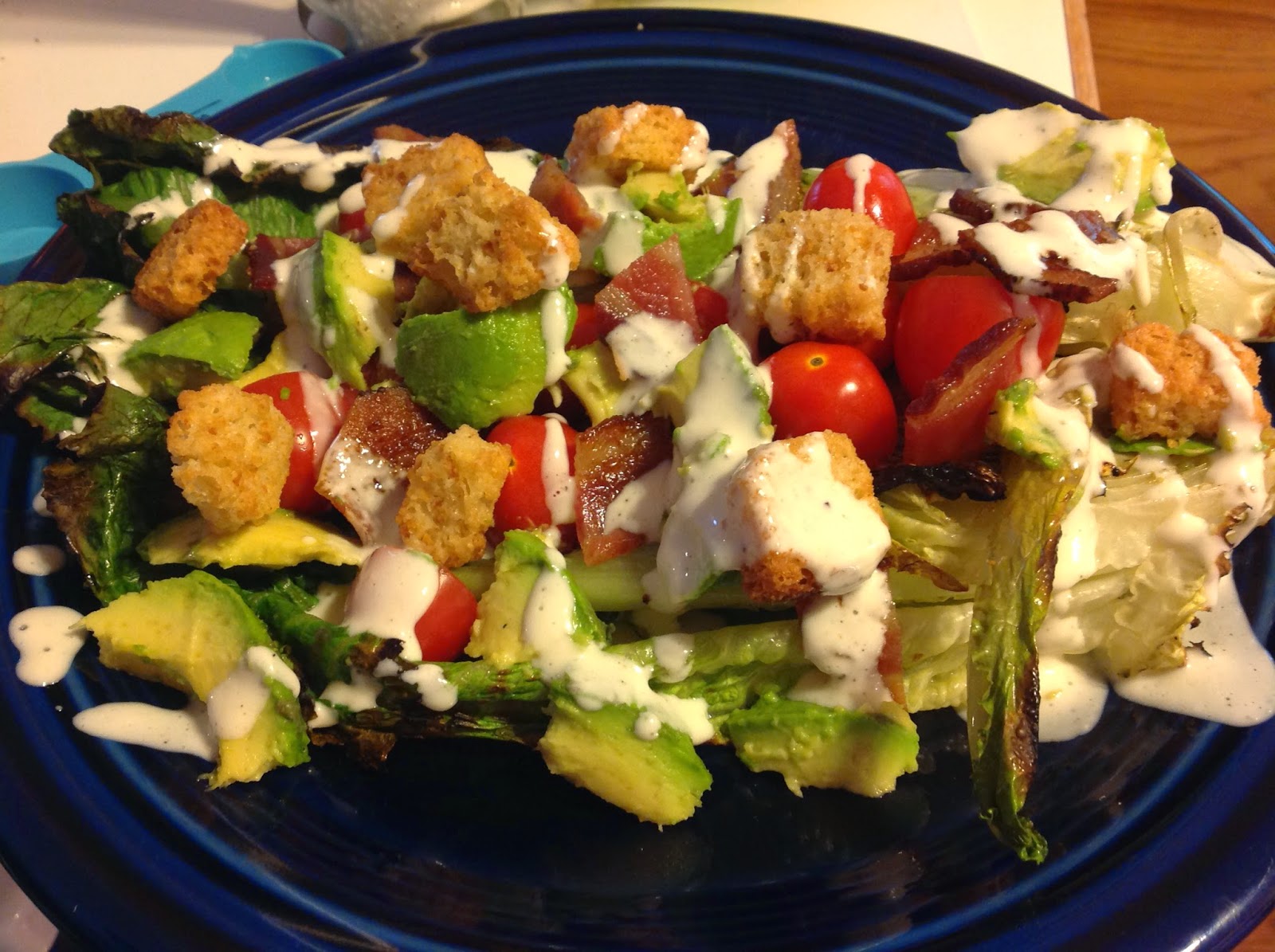 Has anyone started wondering if I still cook anymore? Ha, so it's just Lance that wonders if I still cook? At this stage of our life, less is more and repetition happens. We have standbys that will please everyone and things I know I can make that won't make me want to throw up once I smell the finished product (food smells are still bothersome). I really like summer and the minimally prepared seasonal foods that go with them. Lance tolerates salad reasonably well and Lucan, well, not so much. But in the case of this BLT salad, I was able to deconstruct it some where Lucan was eating "parts" of the salad along with us. And in the eyes of Dinner: A Love Story, that is a dinner win.

Heat the grill on medium high.
Brush the romaine lettuce with olive oil.
Place the romaine lettuce on the grill, cut side down for 3 minutes, then flip it to the other side and grill for 3 minutes (really watch your lettuce - if your grill runs hot, you don't want to burn your salad. Burnt lettuce is as about tasty as charred paper. I speak from experience.)
Plate the lettuce.
Top the grilled romaine lettuce with the tomatoes, bacon, croutons, and the avocado.
To make the dressing, whisk the mayonnaise, milk, vinegar, garlic powder, and pepper together until smooth.
Drizzle the dressing over the salad.
The best bites are the ones that include a little bit of everything on them. And of course, no burnt lettuce :) For inquiring minds, Lucan ate bacon, croutons and some avocado. That's kind of a balanced meal, right?
Original recipe source PBS Parents.

This year marks the third birthday party I’ve thrown for Lucan. As a reminder, we’ve had a) a crabby themed party b) a Hungry Caterpillar themed party and c) and now a Milk and Cookies party. I figured this was the last year I really got to “choose” a theme for the party so I milked it (ha! Did you catch that!?) for all it’s worth. That and I got really lucky in the fact that my friend Molly had done a Milk and Cookies party for her son and let me borrow a ton of things from her. Where would I be without my friends? Nowhere NEAR as blessed :) 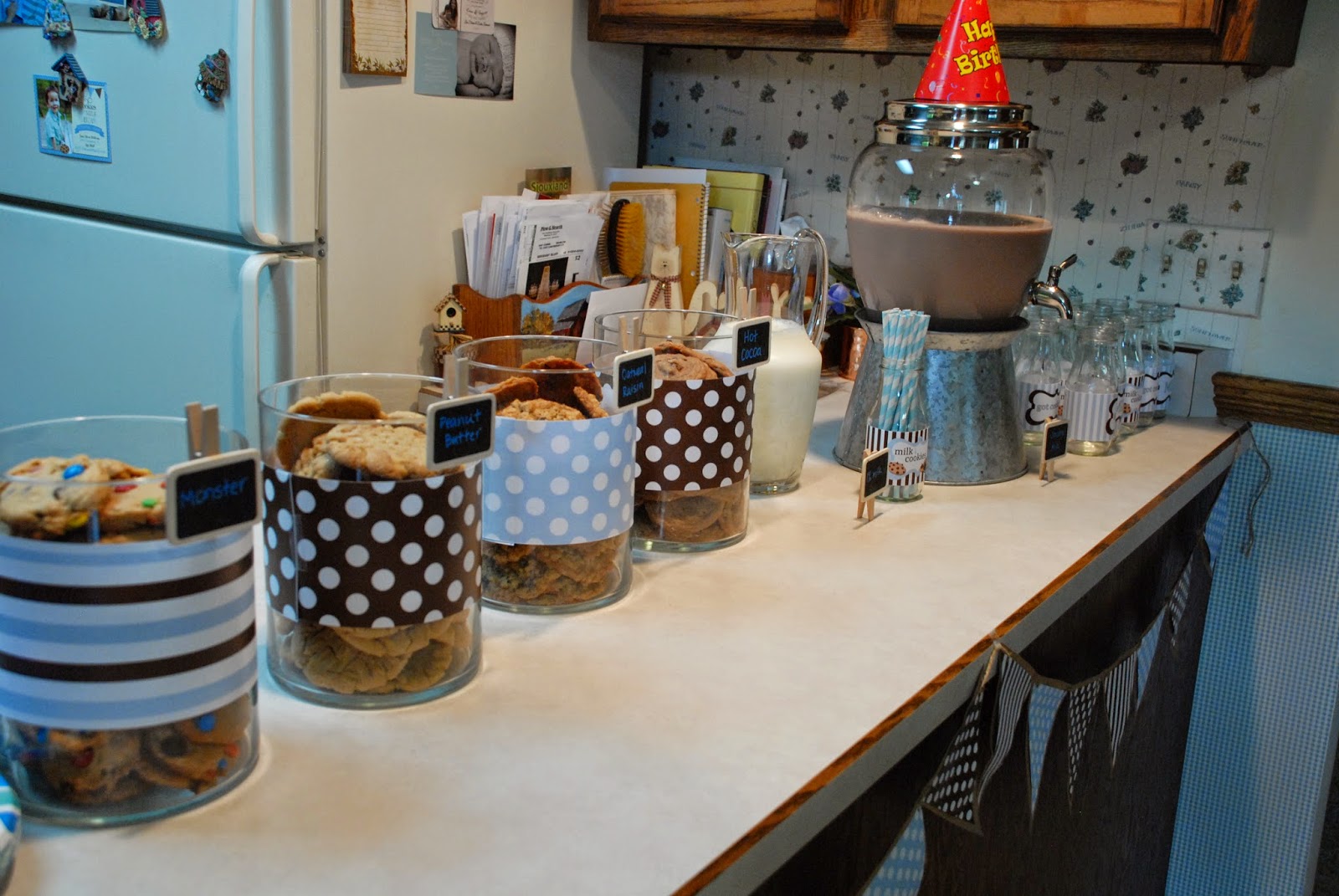 Molly loaned me all of the milk bottles, the cookie containers and shared the printable files that weren’t personalized. The bottles were definitely one of the cutest things about the party; Molly had asked around on facebook if there was anyone who had extra Starbucks Frappucino bottles and hit the jackpot when she found a friend who was addicted to the stuff. 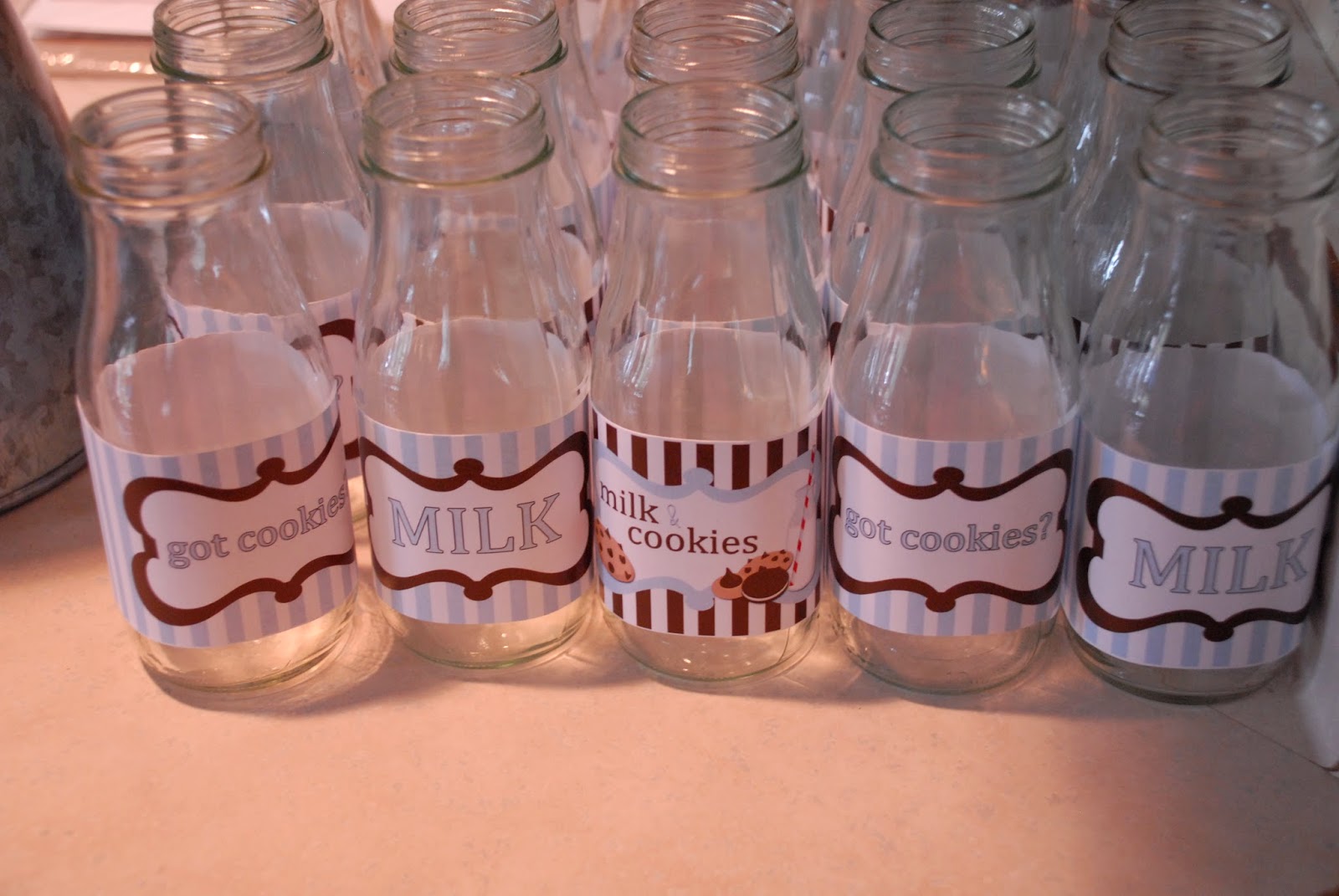 I purchased an art file off of Etsy for the party invitations and then had them printed at a local printer here in town. Easy-peasy. The rest of the printables I printed off a color printer and then cut them out in my "spare time" (spare time meaning the Wed night before the party at 10:30 PM).  The pennant banner was a last minute addition. I printed off the individual triangles on just regular paper because I didn’t want to go through the hassle of going and printing them at a professional printer or purchasing cardstock. I made a slightly larger triangle and traced it onto paper bags I got from the grocery store! Each paper bag pennant triangle served as the backing for the colored pennant. I used glue dots to adhere the two layers together, checked with my mom to make sure she had some twine, punched holes and called it good. And it was the item (besides the milk bottles) that everyone commented on at the party. 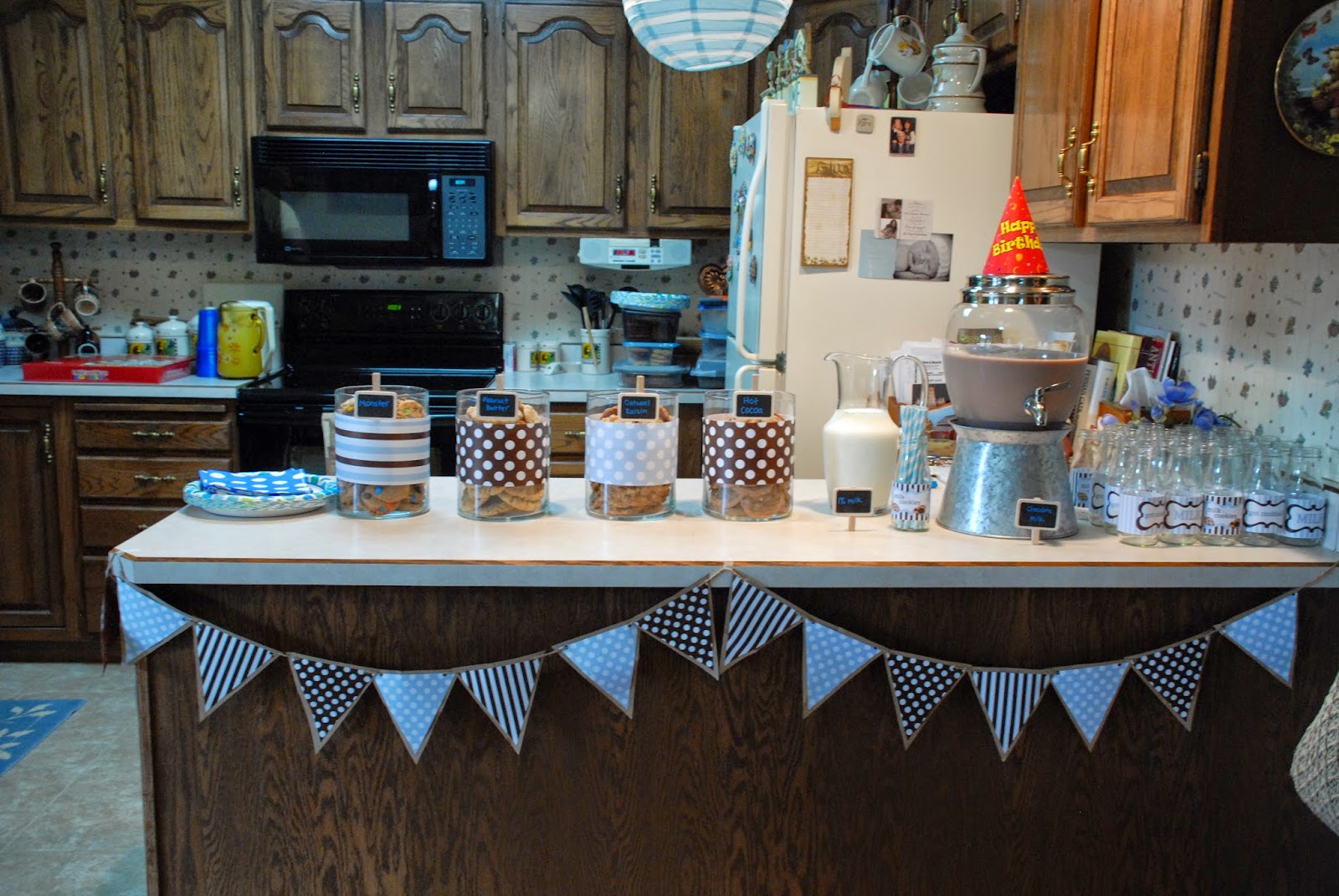 We served four different kinds of cookies, two kinds of milk (white and chocolate) and my mom had one of those giant chocolate chip cookie cakes made for Lucan. Lucan loved his cookie cake, especially licking off all the frosting and not eating a bite of the actual cookie. Silly boy. I made monster cookies, oatmeal raisin cookies and hot chocolate cookies. I purchased the chalkboard clothes pin labels off of etsy with a credit I won in a giveaway. My momma, the saint, made peanut butter cookies and graciously hosted the party. One of the nice things I’ve found that if I’m having “family” only parties is that if I have them at my parents’ house I don’t have to make a full meal for everyone. And I don’t have to clean. 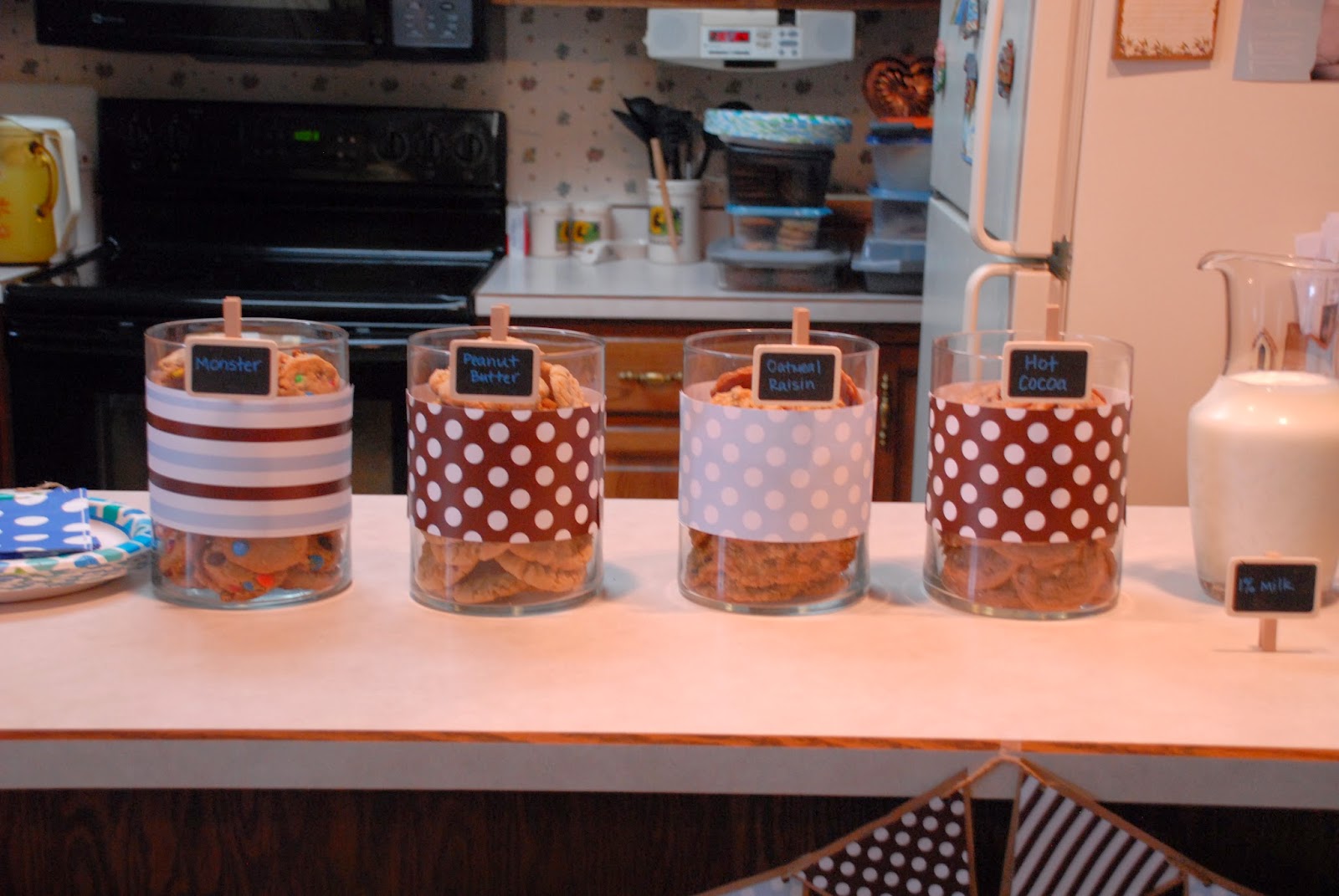 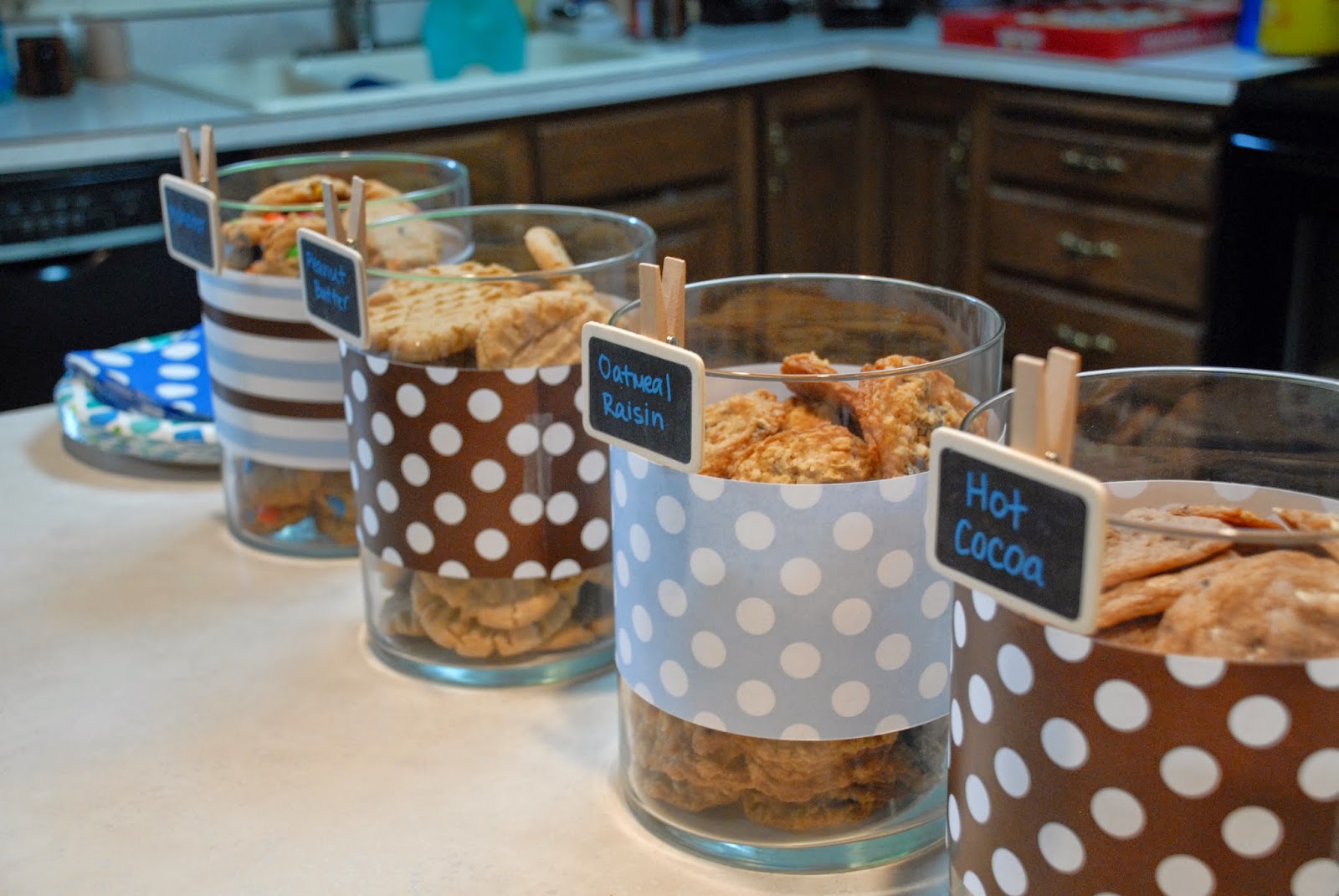 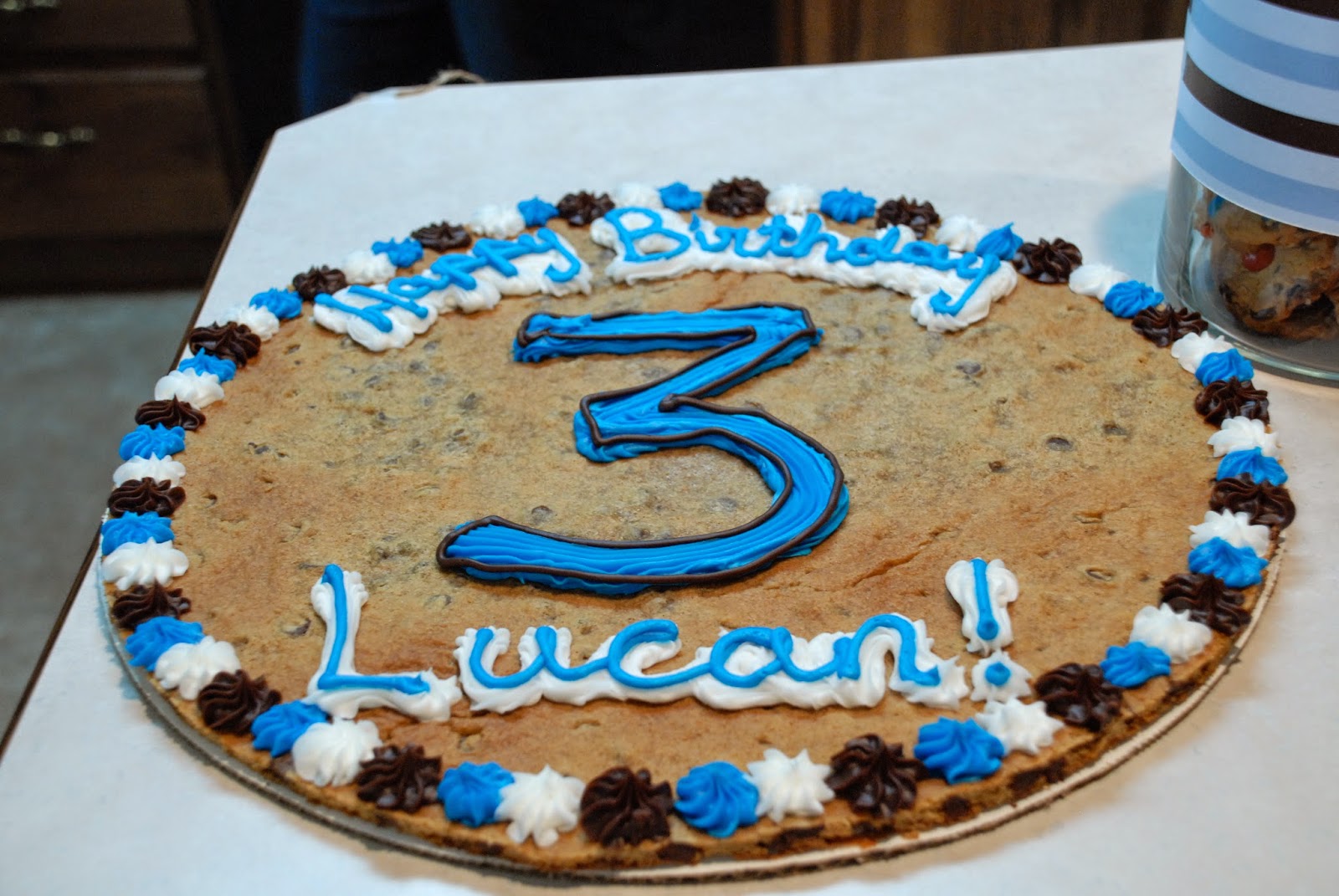 Another kind friend, Kelly, loaned me the glass drink dispenser for the chocolate milk. Chocolate milk was definitely the crowd favorite. The straws were from Molly. Like I said, I have great people in my life.

Last minute party details included assembling the pennant banner, taping on the milk bottle wrappers and adding decorative paper to the cookie containers. If there isn’t a ton of last minute things the night before the actual party, it isn’t a Kara party. Lance says that he’s just come to expect it out of me :) I think he'd appreciate if there wasn't last minute stuff, but we don't always get what we want! 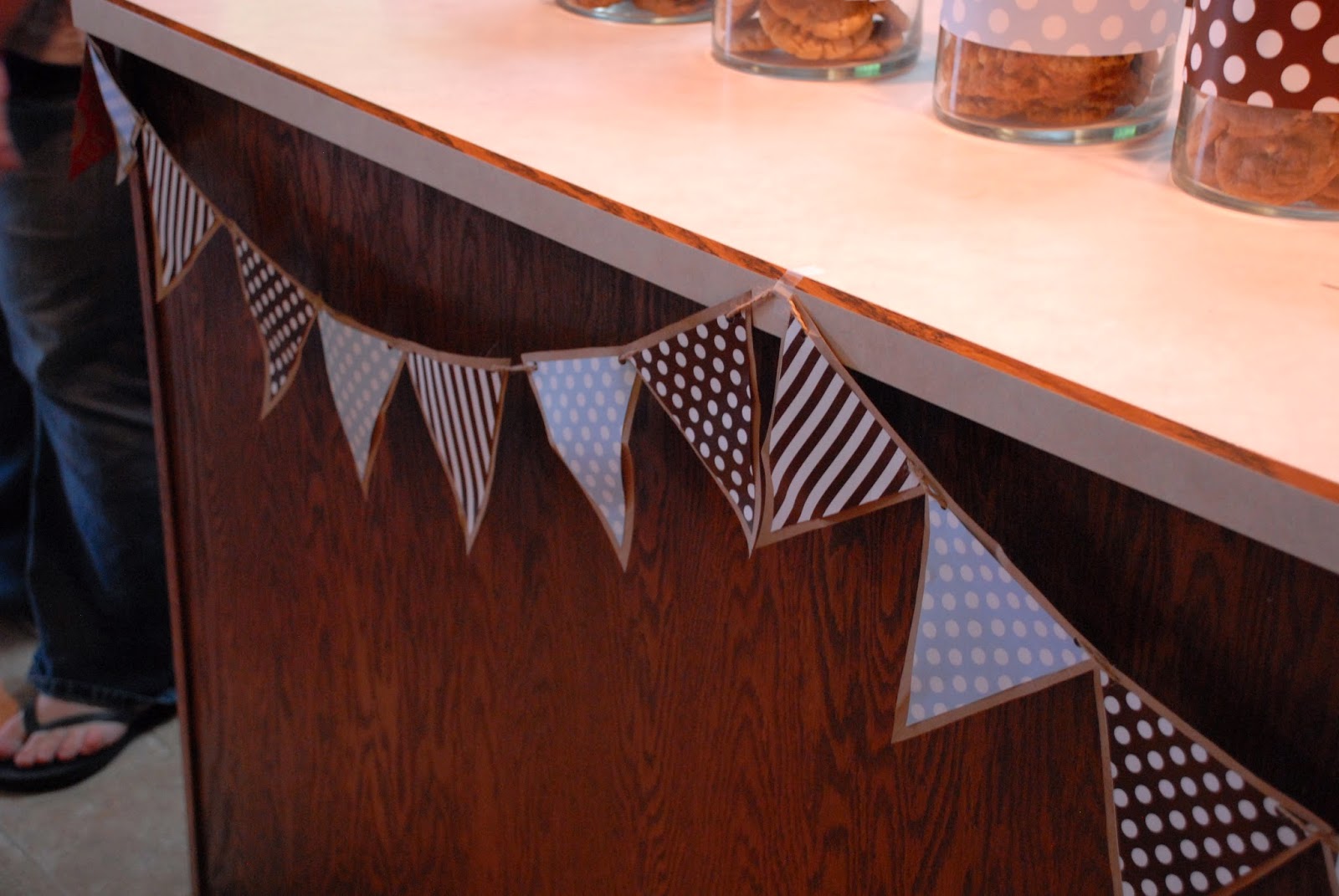 For Lu's first birthday party, I made a laminated "happy birthday" and "lucan" pennant banner and I reuse them year to year. I forgot to make a welcome sign so we hung the Lucan pennant banner outside. Just in case people were confused. 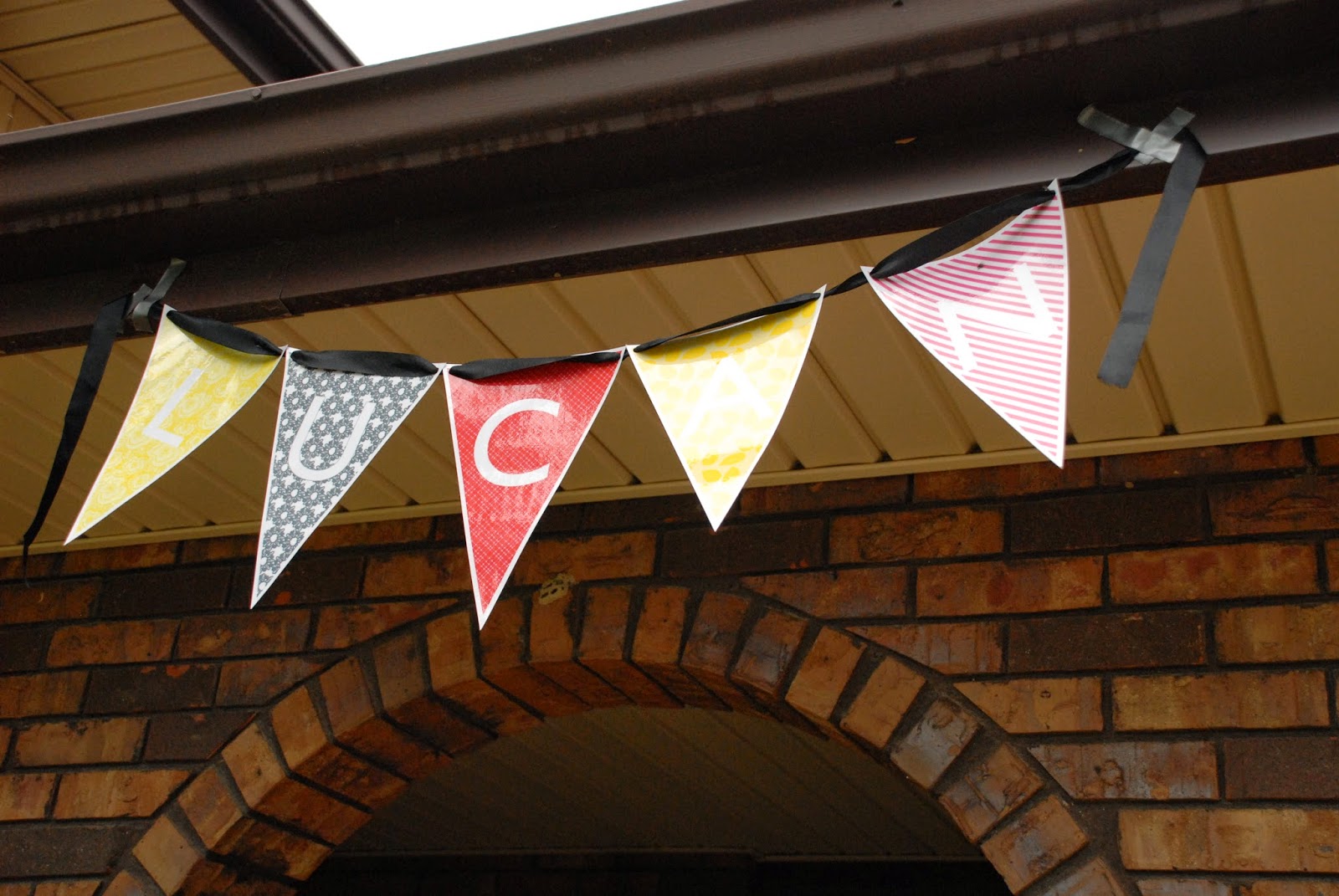 No birthday party is complete without a few construction themed birthday presents. 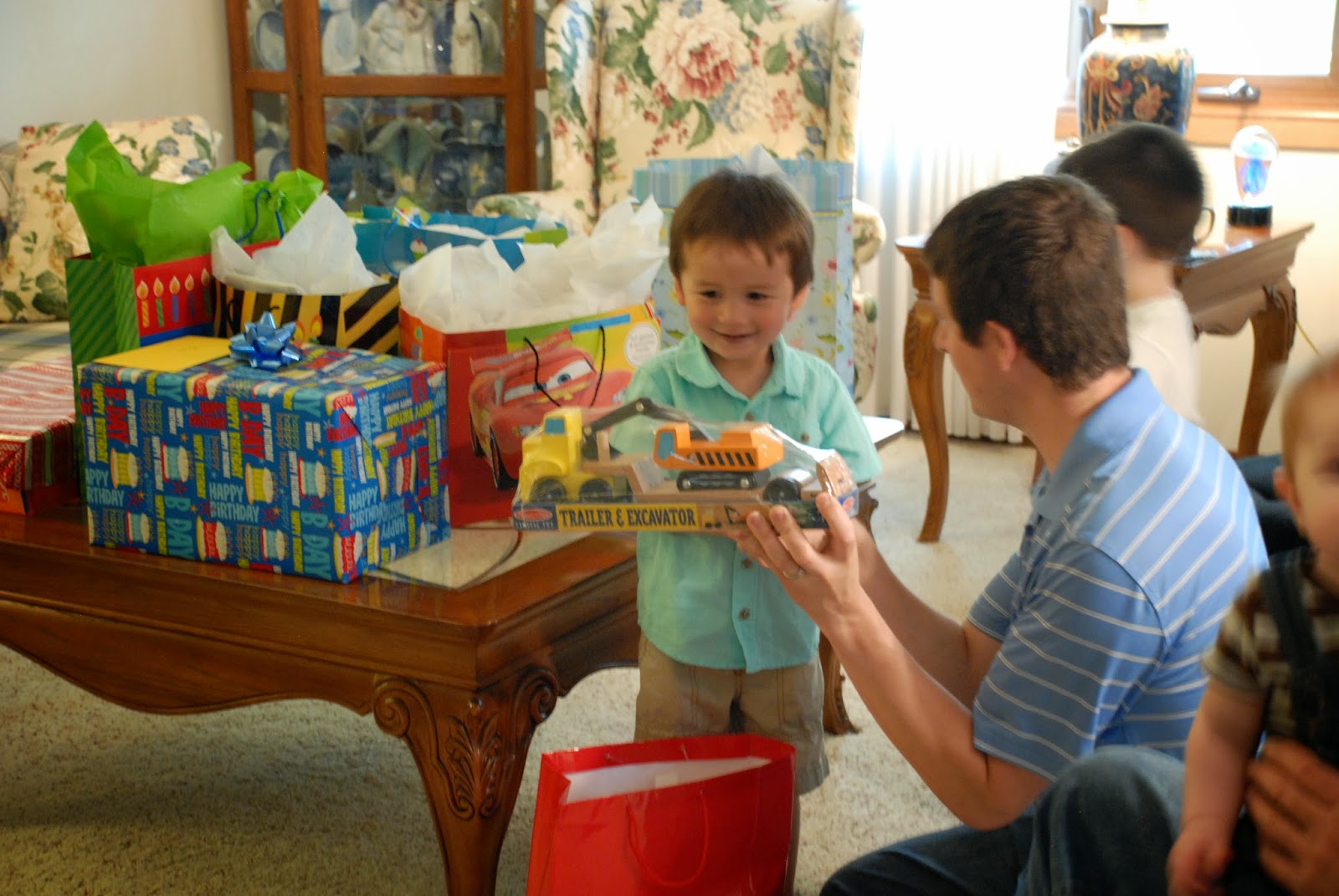 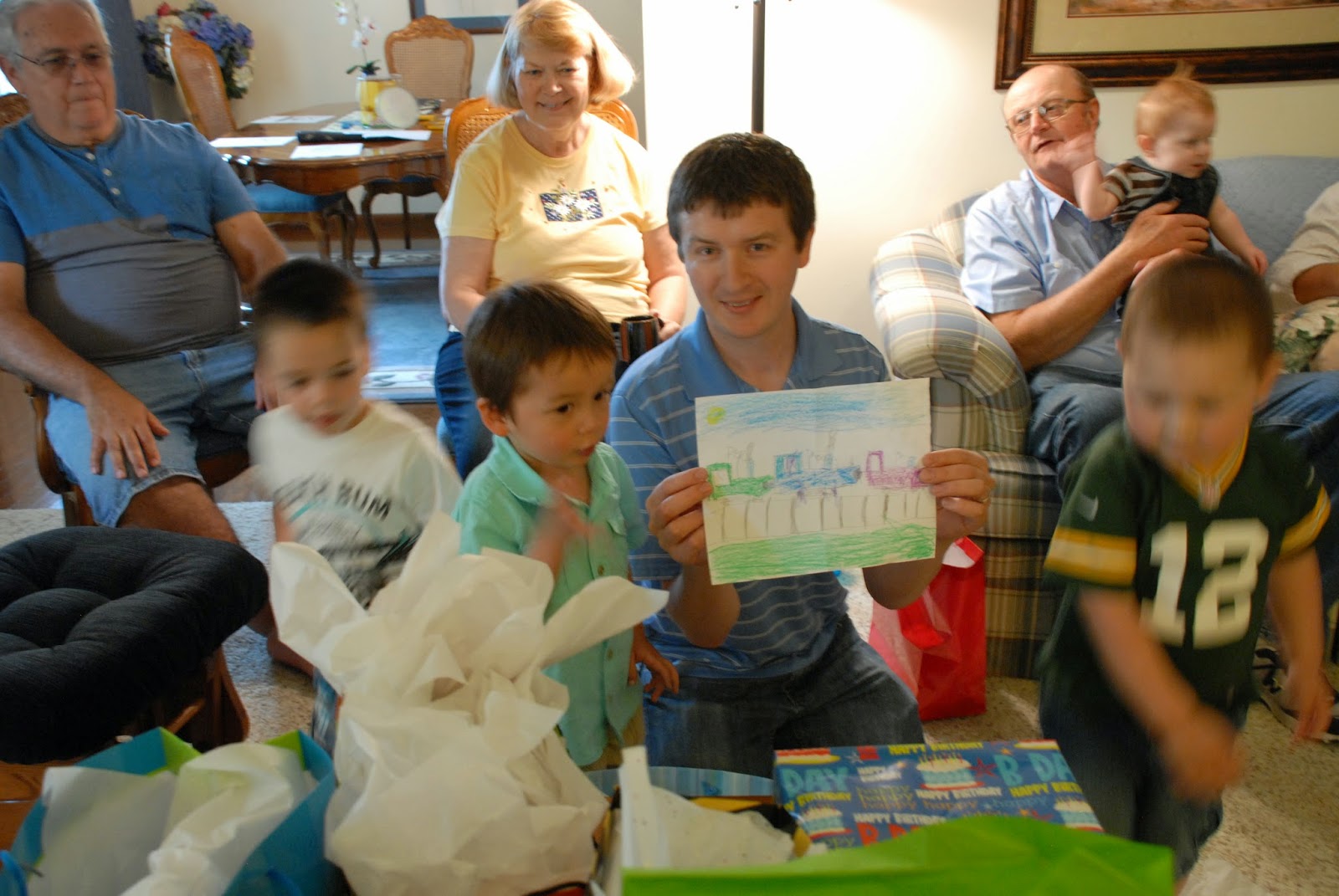 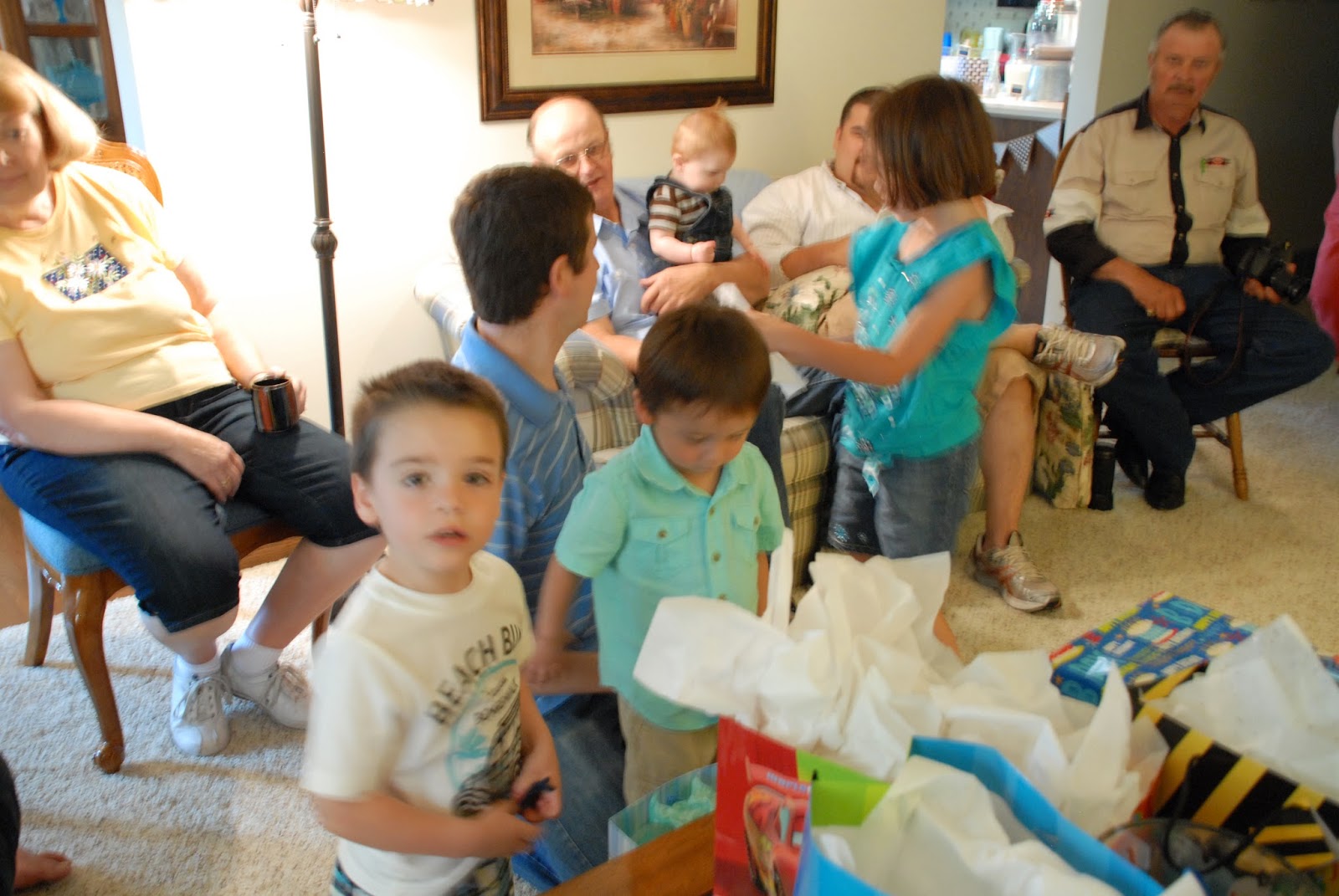 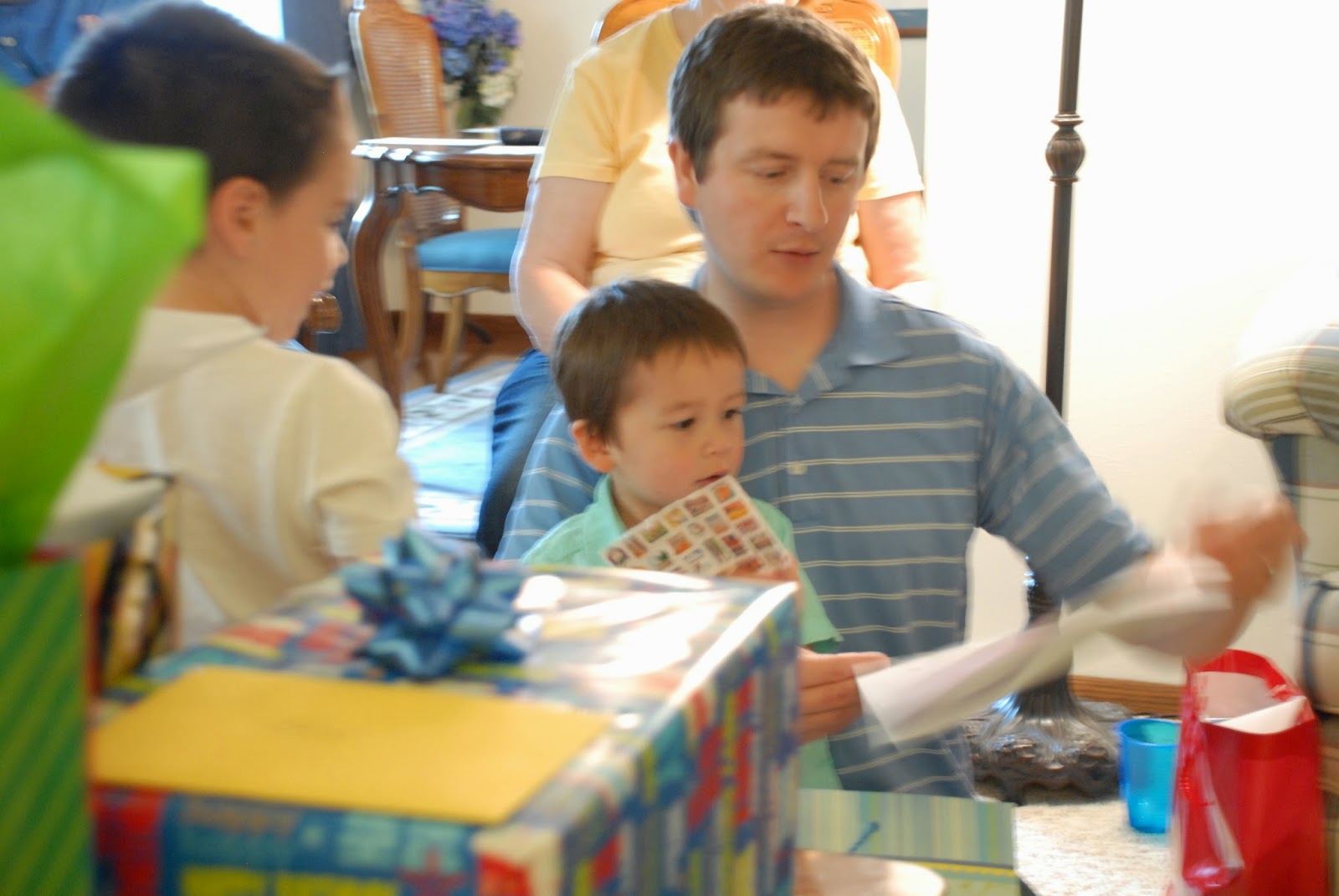 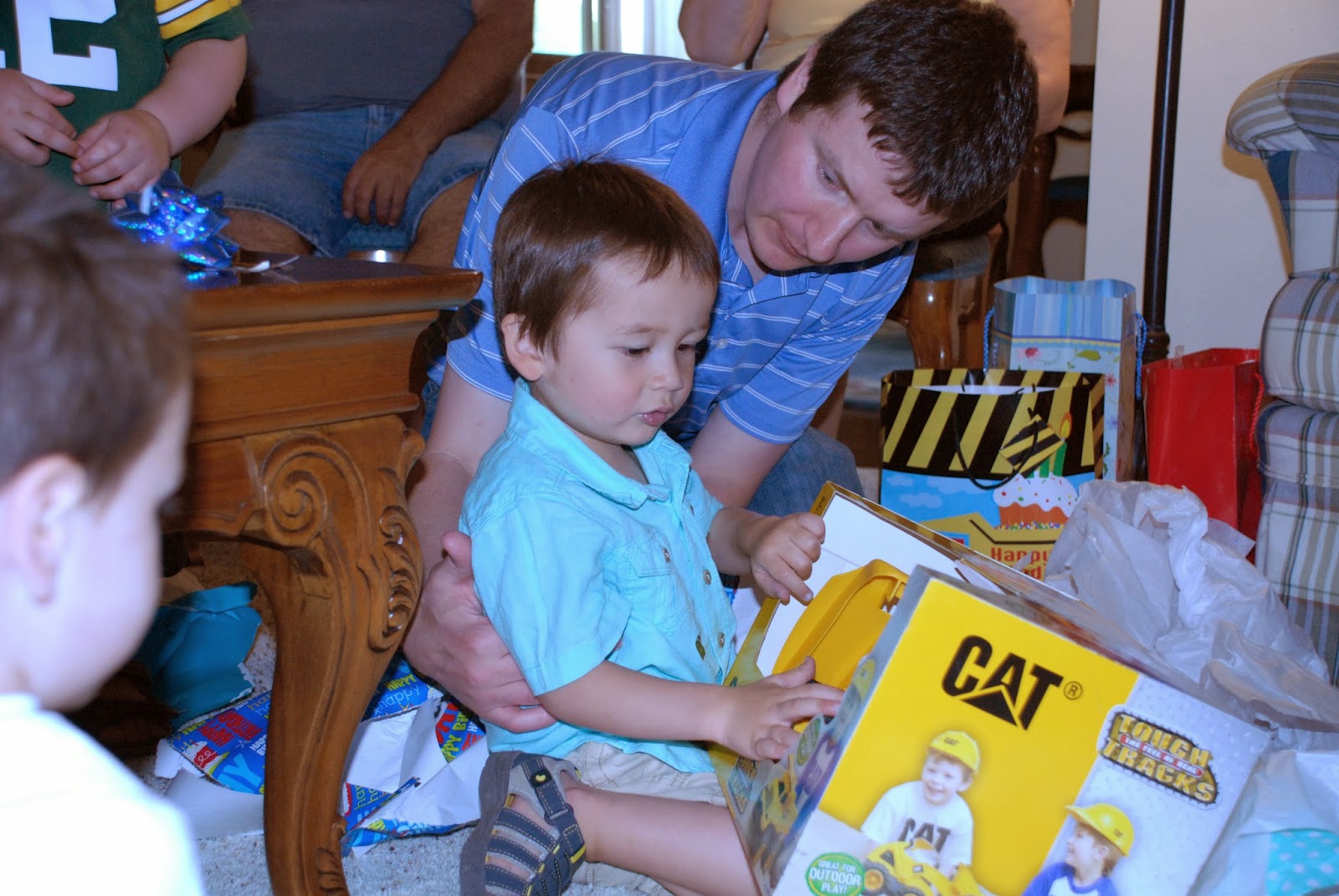 It was at this point my really nice DSLR Nikon unexpectedly up and died on me. I was happy that I had captured most of the party up until then, but I still wasn't pleased. I naively thought that if I took out the batteries that it would fix itself. I was wrong. I ended up working with a local photography retail store to have them mail it into Nikon in which I received a bid of almost $300 to fix my camera. I wasn't pleased as the repairs basically equaled the value of the actual camera. Annoying.

Anyway, I missed getting to shoot everyone's expressions as Lucan opened up his final present: ours. This present included his "big brother" t-shirt and our announcement that Lucan was about to be upgraded to big brother this December.

On Lu's actual birthday, he was pretty sick with strep and an ear infection so he got to hang out with Mom and Dad. We had thought it would have been fun to take him to Chik-Fil-A or out for ice cream as his special birthday treat, but it just didn't happen. Instead we stuck around the house and had his special ice cream sundae at home. Not nearly as fun in my eyes, but fun in Lu's eyes, which is the most important thing. This boy loves his ice cream! 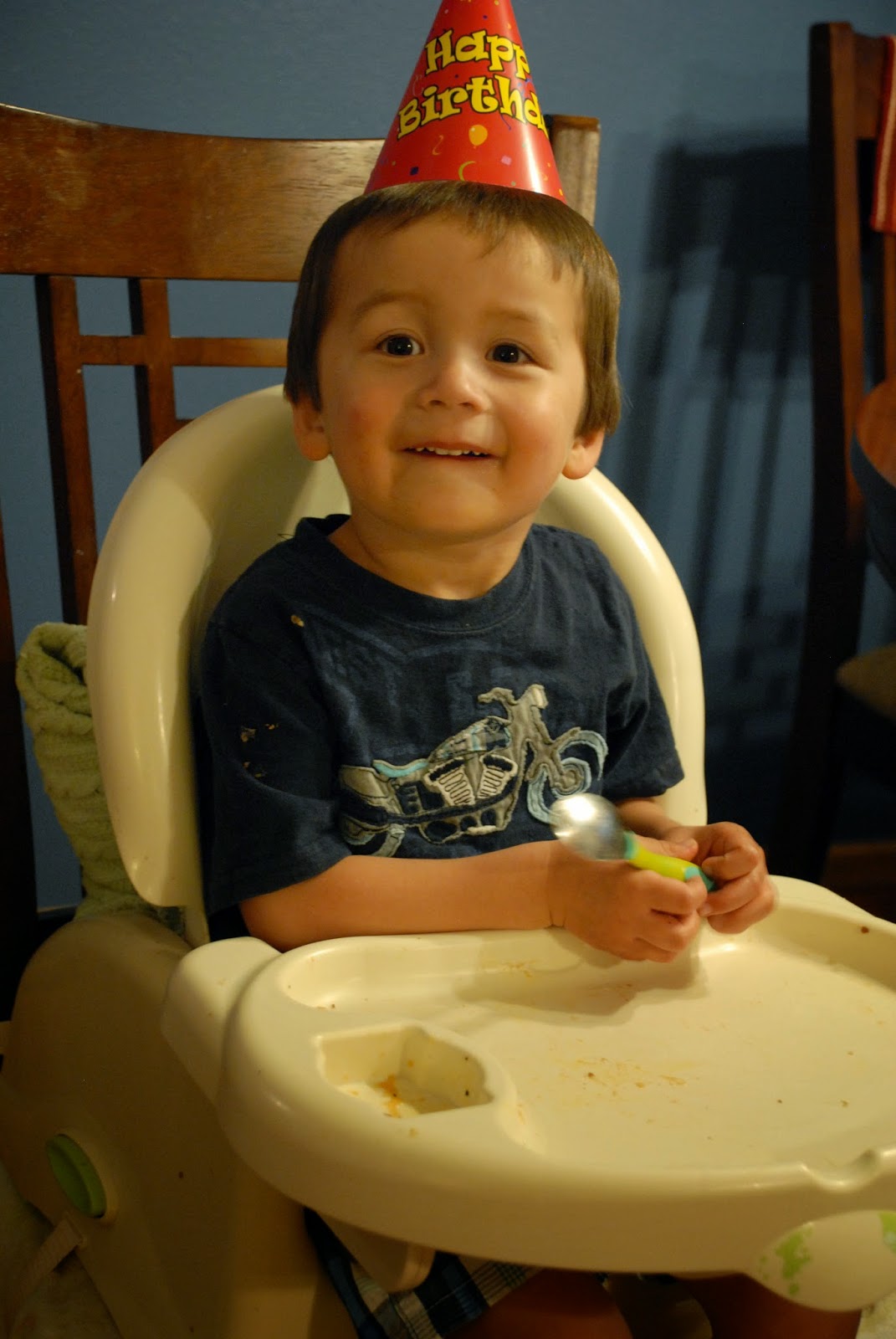 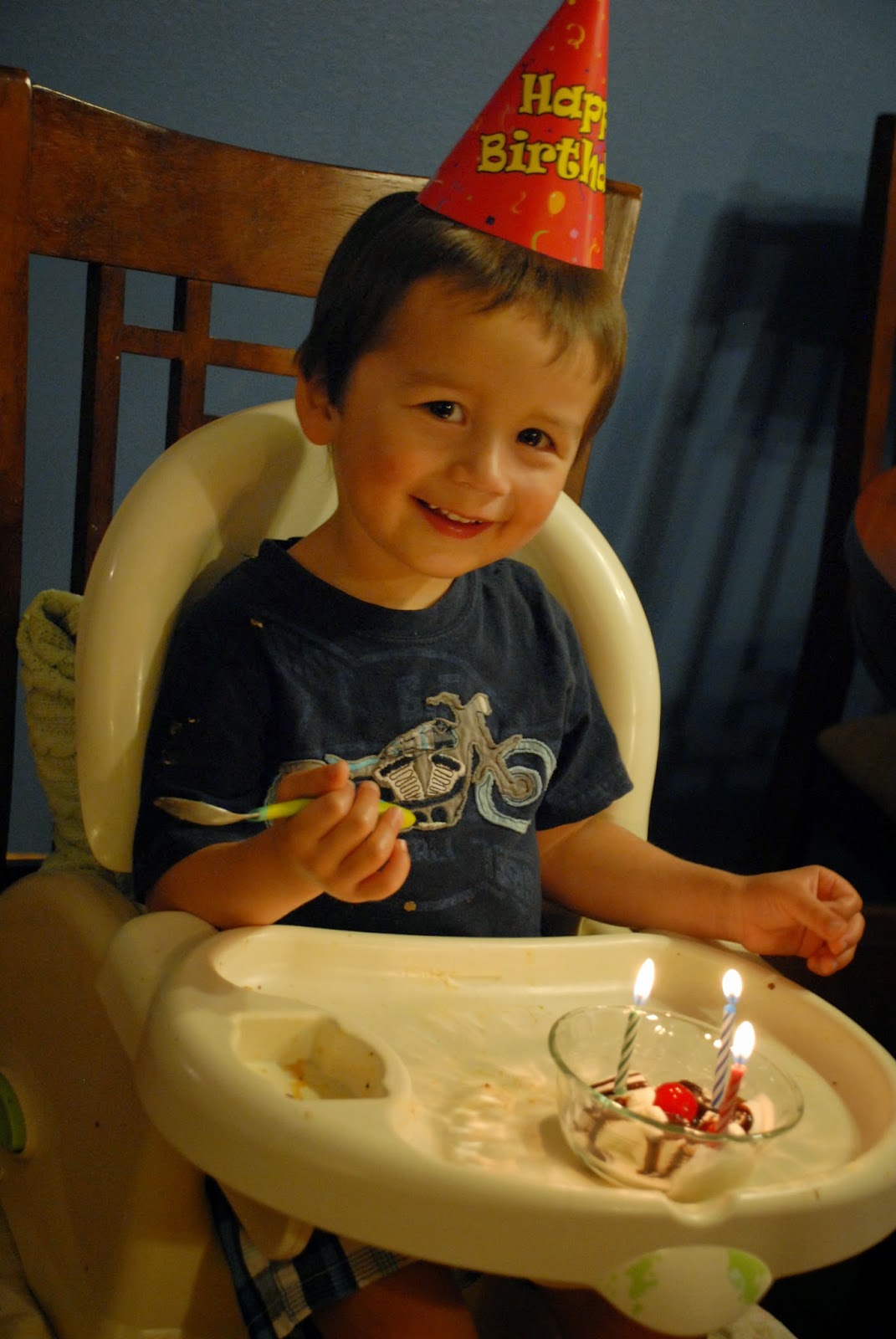 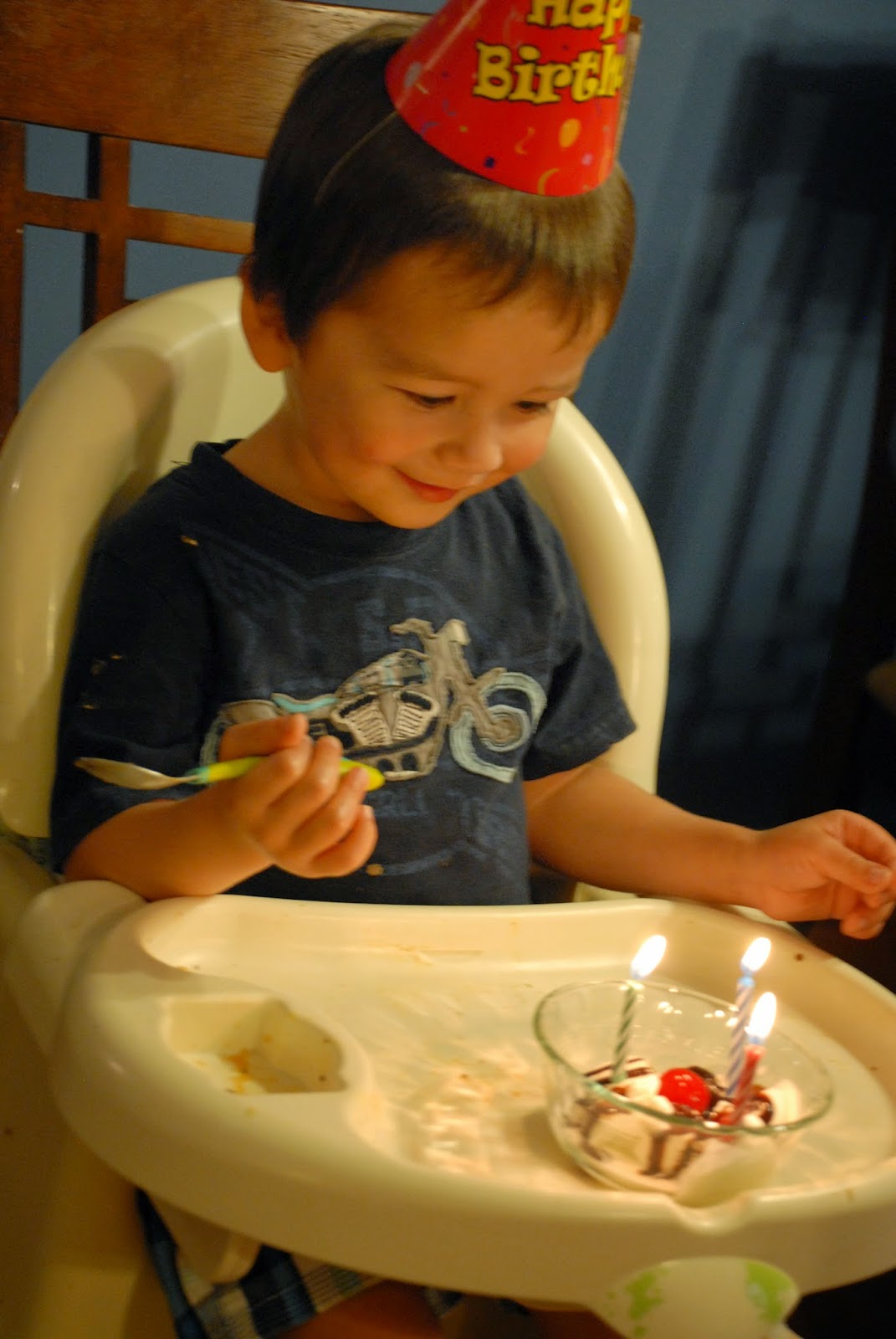 30 Things I'm Thankful for in June